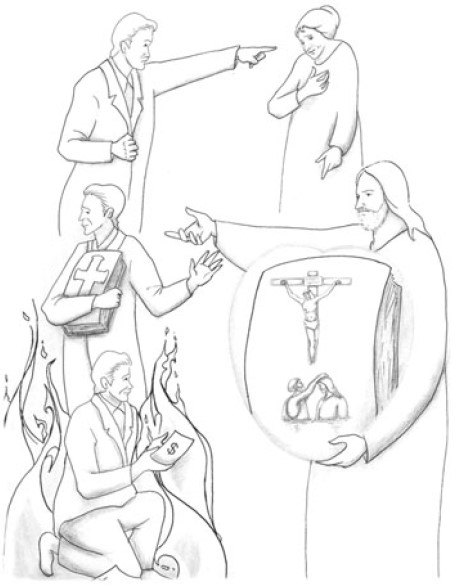 (Luke 11:42-54)
“‘But woe to you Pharisees! For you tithe mint and rue and all manner of herbs, and pass by justice and the love of God. These you ought to have done, without leaving the others undone. Woe to you Pharisees! For you love the best seats in the synagogues and greetings in the marketplaces. Woe to you, scribes and Pharisees, hypocrites! For you are like graves which are not seen, and the men who walk over them are not aware of them.’ Then one of the lawyers answered and said to Him, ‘Teacher, by saying these things You reproach us also.’ And He said, ‘Woe to you also, lawyers! For you load men with burdens hard to bear, and you yourselves do not touch the burdens with one of your fingers. Woe to you! For you build the tombs of the prophets, and your fathers killed them. In fact, you bear witness that you approve the deeds of your fathers; for they indeed killed them, and you build their tombs. Therefore the wisdom of God also said, ‘I will send them prophets and apostles, and some of them they will kill and persecute,’ that the blood of all the prophets which was shed from the foundation of the world may be required of this generation, from the blood of Abel to the blood of Zechariah who perished between the altar and the temple. Yes, I say to you, it shall be required of this generation. Woe to you lawyers! For you have taken away the key of knowledge. You did not enter in yourselves, and those who were entering in you hindered.’ And as He said these things to them, the scribes and Pharisees began to assail Him vehemently, and to cross-examine Him about many things, lying in wait for Him, and seeking to catch Him in something He might say, that they might accuse Him.”

Who Shall Receive Wrath from God?

The era we are living now is the end times. Do you know this fact? We could actually say this era is like the last train for arrival. When we look at people’s hearts and the trend of the world these days, everything the Lord has prophesied is happening exactly according to what He said. From the historical perspective as well as from the biblical perspective, we can see this era is the end times. It is very hard to find a pure heart among people because this is the end times and the phenomena that are to happen in the end times are manifesting everywhere much more than before. Therefore, Satan the Devil has now covered the world with such darkness that the Truth is reckoned as the untruth and what is real has been denigrated as a lie.
Think about the old days just two or three decades ago. Back then, when a new church was planted in a region, the deacons, deaconesses, elders, and lay believers of the neighboring churches would come and at least say an encouraging word like, “God bless your faithful work. Is there anything we can do for you in planting church?” However, how is it now in these days? People do not like a new church being planted in their neighborhood. When they see someone entering a theological seminary, they think, “Isn’t that a college people go to when they cannot go to any other college, or when they fail in business? When they finish studying at seminary and become a pastor, the church will guarantee their living; they can receive a car, house, education cost for their children, traveling expenses, money for books, and many other things through the church.” Actually, the churches of this world are exactly the same organizations as the companies of the world. Now, people do not want new churches to be planted any more. But there is one thing they do not know. They do not know that there really is God’s Church in this world.
During this revival meeting, a sister who was receiving the remission of sins confessed her faith. Do you know what she said? She said she had believed and followed Jesus faithfully, but she later was disappointed after believing in Jesus for a long time. She said that she thought maybe God had died or left her. Therefore, she was envious of people who seemed to believe in Jesus faithfully. But on the other hand, she also thought, “They will all become like me in the end. In what things did I not do in comparing with them? I used to do all things that they do such as casting out demons, speaking in tongues, healing the sick by laying on of hands.” She was saying that they would all become like her in the end no matter how fervently they believed. That sister confessed that it was not very pleasant to believe in Jesus in the end. That is not this sister’s problem only because this era is such an era fundamentally. Actually, this era is the era when people believe in Jesus and become disappointed. You and I are living in an era of end times.
Therefore, do not think it strange to experience hardships and difficulties. This is the era when the Truth is regarded as nothing, and the Truth is persecuted by the untruth. It was not like that even two decades ago. During those times, when someone preached the Truth, people thought, “Is that really true?” and tried to find the evidences of the Truth in God’s Word. Even in the community of pastors, they would respond with much enthusiasm saying, “Wow. That’s really true. He is really preaching the correct Truth.” However, hearts embracing the Truth like that have vanished and Satan is at work instead. Now has become an era when the people who believe and follow the righteousness of Jesus are regarded as abnormal people. Such phenomenon is one of the characteristics of the end times that God spoke of.

“Babylon the Great Is Fallen, Is Fallen”

In the Scripture Word in the Book of Revelation, God spoke about the destruction of the world. When we look at the Word, we can see how the spiritual merchants of the world will lament at that time. It’s because they have accumulated their wealth by doing business of swindling in the name of Jesus. But when God says that He would sweep away that wealth during His judgment at the end time, the people who do business in the Christian community of this world will be embarrassed greatly at that time in the future.
What would happen to this world if God destroyed the world as He said? There are so many skyscrapers including apartments in the metropolitan Seoul, right? They would all crumble down if an earthquake caused a terrible trembling and shook it all up. If God shook the earth just once, all the skyscrapers and buildings would crumble down and hell would come instantly. It means the world would turn into a living hell in no time.
How does our Lord look at us during this end time? The Lord loves those who love Him even more, while the Lord hates those who hate Him even more. You and I live in such an era like that. It is the era when the people who have followed the Lord will follow Him until the end, and the people who have stood against the righteousness of the Lord will go against it endlessly. It is really like that. The people who go against the righteousness of the Lord stand against it so severely without knowing what they are doing right now.
Luke 11:42 states, “But woe to you Pharisees! For you tithe mint and rue and all manner of herbs, and pass by justice and the love of God. These you ought to have done, without leaving the others undone.” What does it say here to the Pharisees? It says, “Woe to you Pharisees!” It means that God’s judgment is clearly prepared for them. Do you think there will be no judgment in this world? There will be judgment once in this world. There will be judgment for each individual as well. The Scriptures say, “And as it is appointed for men to die once, but after this the judgment” (Hebrews 9:27). There is judgment for the entire world once, that is, there is clearly God’s judgment once for you and me individually. Who will be the subject of the judgment especially? The Scriptures say, “Woe to you Pharisees!” It means that there will be judgment of the righteousness of God for the spiritual Pharisees.

Why Do the Pharisees Try Not to Understand and Love the Righteousness of God?