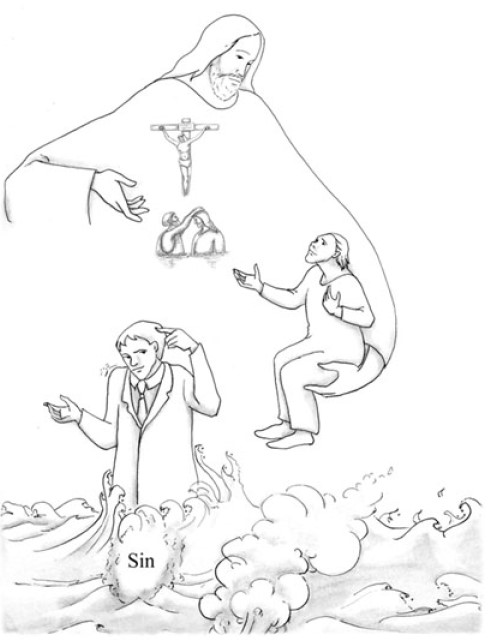 (Luke 13:22-29)
“And He went through the cities and villages, teaching, and journeying toward Jerusalem. Then one said to Him, ‘Lord, are there few who are saved?’ And He said to them, ‘Strive to enter through the narrow gate, for many, I say to you, will seek to enter and will not be able. When once the Master of the house has risen up and shut the door, and you begin to stand outside and knock at the door, saying, ‘Lord, Lord, open for us,’ and He will answer and say to you, ‘I do not know you, where you are from,’ then you will begin to say, ‘We ate and drank in Your presence, and You taught in our streets.’ But He will say, ‘I tell you I do not know you, where you are from. Depart from Me, all you workers of iniquity.’ There will be weeping and gnashing of teeth, when you see Abraham and Isaac and Jacob and all the prophets in the kingdom of God, and yourselves thrust out. They will come from the east and the west, from the north and the south, and sit down in the kingdom of God.’”
(1 Corinthians 1:18-25)
“For the message of the cross is foolishness to those who are perishing, but to us who are being saved it is the power of God. For it is written: ‘I will destroy the wisdom of the wise, and bring to nothing the understanding of the prudent.’ Where is the wise? Where is the scribe? Where is the disputer of this age? Has not God made foolish the wisdom of this world? For since, in the wisdom of God, the world through wisdom did not know God, it pleased God through the foolishness of the message preached to save those who believe. For Jews request a sign, and Greeks seek after wisdom; but we preach Christ crucified, to the Jews a stumbling block and to the Greeks foolishness, but to those who are called, both Jews and Greeks, Christ the power of God and the wisdom of God. Because the foolishness of God is wiser than men, and the weakness of God is stronger than men.”

What Sort of People Enter into the Narrow Door?

However, People Think They Are Something Great and Try to Achieve Something with Their Own Wisdom

Simply put, people think of salvation only legalistically. They just think in terms of the law of causality as they say, “If you live by the Law incessantly and faithfully, then you will be saved. If you violate His Law and commit sins, then offer the prayers of repentance for the sins. That’s okay!”
However, God’s wisdom is not like that. How is God’s wisdom? God made us perfectly righteous once and for all through His wisdom. Even though this is the Truth, people of the world pretend to be intelligent themselves bound by the law of causality. They think they should give one if they receive one and receive one if they give one, even in the matter of attaining their salvation. Look at all the people who are officially recognized as wise. Their way of thinking is all the same. They all just follow the thinking, “I earn only as much as I work.” Such people think like that in regards to salvation. Even in the matter of sins being washed away, they think, “My sins will be washed away only as much as the good deeds I perform.”
However, God’s wisdom is not like that. God came to this world and received the baptism from John the Baptist, died on the Cross, made all the people perfect at by resurrecting from the dead, and blotted out all the sins of the world eternally at once. Such perfect wisdom is the wisdom of God. Our human thinking is truly limited. They think they reach a nice place if they do something good; that they achieve success when they work a little harder, and reach the objective if they put much effort into it. However, that is only a very limited human thinking. Our human thinking is very limited and has many shortcomings like this. How is God’s thinking? God has vast, enormous, and immense wisdom. God sent Jesus Christ to this world and made Him receive the baptism, made Him die on the Cross, resurrected Him from death, and blotted out all the eternal sins of the universe. That is the immense wisdom of omniscient God.
What is it like to compare God’s wisdom and the wisdom of human beings? Human beings think working hard to put up one brick on their careers, making progress by that much and gaining something valuable in proportion to that progress is wisdom. Therefore, we must follow the vast and immense wisdom of God because wisdom of human beings is always narrow and unfair.

However, We Cannot Even Fathom God’s Wisdom Because It Is So Immense

What kind of wisdom is God’s wisdom? In God’s wisdom, there is no limit to bestowing His love; but there is no exception in His judgment. He bestows His grace that is unfathomably immense. God the Father has saved us, He sent Jesus Christ to this world and made Him receive the baptism, die on the Cross, and thereby blotted out all our sins eternally and perfectly all at once. That is God’s wisdom. This God saved with grace the people who really acknowledge God and His Word, in order to make foolish the people who go against God with the wisdom of the world.
So many people live in this world. Among those many people, there are people who do not acknowledge God’s Word. They think they are smarter than God and they think their wisdom is better that God’s wisdom. Many people think, “I can live well if I do this and such consequence will result from it.” There are many people who think they are great. These people do not believe in God’s Word. They cannot essentially believe in God. Because they do not believe in God’s Word, they try to resolve with their own wisdom matters of removing sins, going to Heaven, and receiving salvation from sins. That is why they follow a religious life so diligently. They follow a religious life so diligently and do good in the world. They believe that sins are blotted out if they live with the wisdom that their sins are forgiven only as much as the good they perform.
Although it is rare, there are some people who think, “I believe in God’s Word. I cannot live like this, but I acknowledge this Word is the Truth and this Word is God’s wisdom.” They know their own shortcomings and that their thinking is unrighteous and there is nothing wise that could come out from them. They believe in the Word of God who is wiser than they are because they know themselves.
However, there are more people in this world who are not like this. There are more people in the world who boast of their own wisdom and follow the religious life with their own wisdom rather than living the spiritual life with God’s Word. There are few people in the world who acknowledge before the presence of God that they are people with shortcomings who have not had much learning, and believe in God’s Word as they lead their spiritual life.
Who between these two kinds of people would receive salvation? People who acknowledge that they have not had much learning and that they do not know much and lower themselves before the presence of God; people who acknowledge the Word of the Scriptures is the Truth and hold onto God’s wisdom rather than the knowledge they have acquired in the world even though they have much learning in the world; people who consider God’s Word as the only Truth and acknowledge the Word in their heart and acknowledge God—such people believe in the Word of the gospel of the water and the Spirit and receive the true salvation. God gives salvation to such people and bestows grace upon them. The Lord came to this world, received the baptism, carried the sins of the world and died on the Cross, and was resurrected from death for such people. Therefore, He became the Savior for only these people.
However, there are people in the world who do not acknowledge God’s Word even though they do not have anything, who do not have anything to boast of, who do not have anything intelligent to themselves. People who do not acknowledge God and His Word; people who try to live by their power and wisdom; people who try earn salvation from sins with their own endeavor and good deeds; people who want to receive blessings from God even though they try to live well with their own will and fortitude—these people never acknowledge God’s Word, but God never approves them as well.
It says in today’s Scripture passage, “For the message of the cross is foolishness to those who are perishing, but to us who are being saved it is the power of God.” This Word of the Bible is God’s wisdom and power. Actually, so many people live in America, Africa, Asia, Europe, Oceania, and many places around the world, and many people including you and your family live in Korea as well now. However, there are not many people who acknowledge God’s Word and God who manifested in the Scriptures. Many people think to themselves with their own wisdom that they are smart, but no one in the world could be more foolish than they are.
Then, who are the truly wise people? People who acknowledge God and His Word; those who know in the Word of God that they are the creatures of God and that they are sinners; those who know that they cannot but go to hell in that Word and therefore believe in Jesus Christ within the Word and receive the remission of sins—such people are truly wise ones. People who have the faith of believing in God and His Word are the truly spiritual people.

Who Are the Spiritual People?

How Can One Blot Out All His Sins by Oneself?