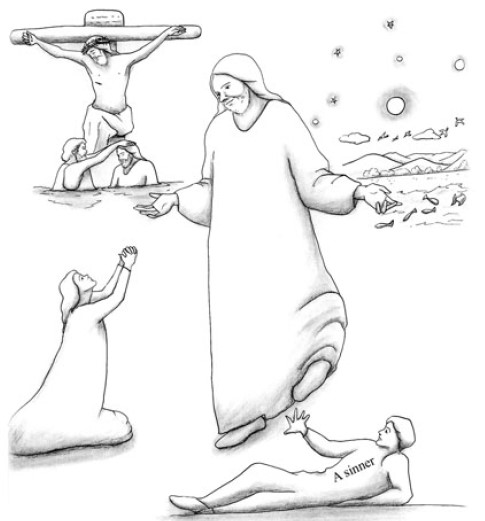 (Luke 14:25-33)
“Now great multitudes went with Him. And He turned and said to them, “If anyone comes to Me and does not hate his father and mother, wife and children, brothers and sisters, yes, and his own life also, he cannot be My disciple. And whoever does not bear his cross and come after Me cannot be My disciple. For which of you, intending to build a tower, does not sit down first and count the cost, whether he has enough to finish it—lest, after he has laid the foundation, and is not able to finish, all who see it begin to mock him, saying, ‘This man began to build and was not able to finish’? Or what king, going to make war against another king, does not sit down first and consider whether he is able with ten thousand to meet him who comes against him with twenty thousand? Or else, while the other is still a great way off, he sends a delegation and asks conditions of peace. So likewise, whoever of you does not forsake all that he has cannot be My disciple.”

Who Becomes a Disciple of the Lord?

My fellow believers, if we are to become the disciples of the Lord, we must first know three things. Our Lord said, “If anyone comes to Me and does not hate his father and mother, wife and children, brothers and sisters, yes, and his own life also, he cannot be My disciple” (Luke 14:26). To become a disciple of the Lord, we have to do likewise. Our Lord tells us directly what we should do, if we are to follow Him.
My fellow believes, do you want to become disciples of the Lord? It is easy for you to be saved from all your sins by believing in the gospel of the water and the Spirit, but it is not easy to become the disciples of the Lord. But in here, the Lord speaks of three things that are necessary for us to become His disciples.
First, to become the Lord’s disciples, we have to hate our fathers and mothers, wives and children, brothers and sisters, and even our own lives. What does this Word mean? When He says that we should hate our parents, wives and children, and even our lives, this does not mean to fall into the trap of nihilism, detest the society and the mankind and hate them and kill them. This means that if our own lives or relationships with our family members such as our parents, our wives and children, our brothers, and sisters hinder us from following our Lord, He tells us to hate these relationships and worldly things. This is the first thing that is necessary for us to become the Lord’s disciples.
When we are willing to follow the Lord after being born again by receiving the remission of sins through the Word of God, the first stumbling stone would be our own family, especially our own parents. For example, if we were willing to obey the will of God, we would feel like we are undutiful to our parents; if we were willing to obey the will of our parents, this would make us feel that we are impious to our God. This is the first problem you encounter. In other words, this is the first problem you run into when you truly want to follow the Lord and become His disciple.
But this does not mean to hate all worldly relations unconditionally. Only when something hinders us from following the Lord, we must hate it. Only then can we follow the will of our Lord. Do remember that sometimes we can follow our Lord only when we hate even our own lives.

If It Is So, It Is Not Easy to Become the Disciples of the Lord, Is It?

These are the first troubles we face when we try to follow the Lord after meeting Him. I spent 10 years as a Christian enthusiast before meeting the Lord. But the first problem that I encountered after meeting the Lord was that my parents, my fleshly brothers, and sisters had become the stumbling stone. My adoptive mother ran a huge prayer house at that time and was going to hand it over to me. She told me, “You, my son! You have studied so much, but why are you acting like this now? You have to listen to and obey me. Minister with me in this prayer house as we did before. Why do you have to go out and pioneer a new denomination just because God told you to do so? Does it have to be you who has to go out and proclaim the gospel and act like you are something? If you act like that it may please God but it does not please me. People in our denomination will surely mistake you for something else.” But I forsook her and followed the will of the Lord. When we are trying to follow the Lord as He had told us, only those who can hate every thing that is against His will can become His disciples.
Secondly, to become His disciples, as the Lord told us, “Whoever does not bear his cross and come after Me cannot be My disciple” (Luke 14:27), we have to bear our cross and follow Him. Only then can we become the disciples of the Lord. Of course, it is better to follow the Lord comfortably rather than in difficulty. But all of us have our own cross when following the Lord. We all have difficulties. We can become His disciples when each of us bears such a cross and follows Him. Thus, becoming followers of the Lord may be easy and difficult at the same time. In conclusion, only those who can follow the Lord in difficulties can become His disciples.

What Do We Need to Become the Disciples of the Lord?

When Two People Meet, One Must Be a Teacher

When two people meet, one must be a teacher while the other becomes a student. We must be students ourselves. But if we are trying to become disciples of the Lord, trying to follow Him, and trying to accompany Him with many things to boast, we would cause too much trouble for the Lord. Also, it will be too hard for Him to use us as the servants for His work. The Lord would say to us, “You are so proud! I cannot be your teacher. I have no qualification for being your teacher. I would rather be your follower. How can you be My disciple? Graduate! Graduate from Me. Then I will be your student and you can teach Me. I will follow you. If your word is the truth, I will follow you.” But He cannot become our student, because our words cannot be the truth. Thus, He will say, “Stop following Me. You go your way, and I will go My way.” Among the born again, there are many people who think they are smart and who have many things to boast. But these people cannot serve the Lord. They cannot become His disciples.
My fellow believers, I also have something I am proud of. In my own opinion, I have things that I am good at. I believe you have these things, too. In our own opinions, we all are great. If we think about it, we are always at the top of other people, not below or behind them. People are all great in their own thoughts, but the Lord tells us otherwise: “Do you want to become My disciples after giving up all that you are proud of? Or do you want to become a teacher yourself, since you are so great? Should we go the other way? Choose between these two.” This is what the Lord is telling us; “You can keep being proud of yourself, and I know I am great. So both of us are teachers. We cannot sustain this kind of relationship anymore. Let’s go the other way.”
The Lord is tired of such people. So I think of this: “Should I insist on my own righteousness, or give it up.” Of course, it is not easy to give up our own righteousness. But what the Lord wants from us who want to live the lives of disciples is this: “Give up your own righteousness. Let go of all your pride. Get rid of your own righteousness and bear My Righteousness, and be obedient to My Word, and follow Me only.” My fellow believers, do you understand the will of the Lord? This is what pleases Him.
Women and men alike, all people have respect for themselves. Humans boast about themselves, whatever little things that they are proud of. But the Lord wants us to forsake this. The Lord does not want us to brag about ourselves and our own righteousness in front of Him. Instead, the Lord truly wants us to reveal our shortcomings in front of Him and our brothers and sisters. He wants us to proclaim, “I lack so much. I need more and more of You, my God. But I want to be a disciple of Jesus Christ and follow God throughout my whole life.”
But if God tells me that He cannot use me because I am too proud of myself, this is not good. Not only myself, but all of you need to give up your own righteousness. I believe that if we have too many things to boast, if we are full of our own righteousness, and therefore, if the Lord tells us that He cannot use us, we need to give up everything that hinders us from becoming His disciples. What our Lord wants from us is for us to give up our own righteousness, things that we are proud of, things that we think that are right, good, and true on our own.