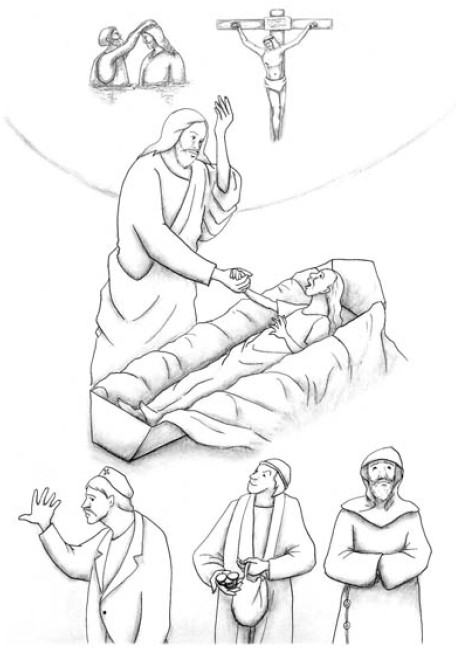 (Luke 15:1-10)
“Then all the tax collectors and the sinners drew near to Him to hear Him. And the Pharisees and scribes complained, saying, ‘This Man receives sinners and eats with them.’ So He spoke this parable to them, saying: ‘What man of you, having a hundred sheep, if he loses one of them, does not leave the ninety-nine in the wilderness, and go after the one which is lost until he finds it? And when he has found it, he lays it on his shoulders, rejoicing. And when he comes home, he calls together his friends and neighbors, saying to them, ‘Rejoice with me, for I have found my sheep which was lost!’ I say to you that likewise there will be more joy in heaven over one sinner who repents than over ninety-nine just persons who need no repentance. Or what woman, having ten silver coins, if she loses one coin, does not light a lamp, sweep the house, and search carefully until she finds it? And when she has found it, she calls her friends and neighbors together, saying, ‘Rejoice with me, for I have found the piece which I lost!’ Likewise, I say to you, there is joy in the presence of the angels of God over one sinner who repents.’”

Does the Lord Find Those Who Have Been Lost?

In Luke 15 that we read today, there are two parables: the parable of the lost sheep and the parable of the lost coin. The Lord here is speaking through two parables; one is speaking of how much joy the Lord had when He, the Master, found one of a hundred of His sheep which had lost its way. It’s speaking of how tiresome and difficult it is for Him to find a sheep that has been lost and that it is a very joyful thing to find it. God is powerful, but I can’t describe how difficult it is for Him to find a sheep that has left His house as it wanted. My fellow believers, finding one lost sheep is such a joyous thing that all the people in the village gathered and had a feast.
The second parable is a story of losing a drachma. A woman lost one of the coins, turned everything over, looked everywhere on the floor, moved her wardrobe, cleaned where it had been, and she searched through ten years worth of dust. She even wondered if maybe she hadn’t lost it between the wall and the wallpaper, so she tore the whole house apart looking for it. Doing that is really annoying and difficult. The woman swept her house, cleaned it, turned it over, and tore up the wallpaper to find a coin she had lost. She wondered if perhaps it hadn’t fallen into a bowl and turned all the bowls over. She wondered if maybe it was with her clothes and shook them all out. How much of a commotion do we make when we lose things that are precious to us? When we lost something that was most precious to us and didn’t know whether it was hidden behind the refrigerator, under the television, or behind the wardrobe, we would try our best to find it. It was really precious and we had to find it, but it wasn’t anywhere. Didn’t we sweep, clean, turn the whole house over, and diligently search for it? That’s the way it is when people try to find something they lost. It’s also tiresome and hard for God to find someone He’s lost. God looks for our souls that way. People think that a coin isn’t a lot, but God thus looks for the most precious souls who haven’t received the remission of sins, wander, and are lost.
There are quite a lot of people in this world. But the Lord asked here, “What man of you, having a hundred sheep, if he loses one of them, does not leave the ninety-nine in the wilderness, and go after the one which is lost until he finds it?” (Luke 15:4) Not all people in a hundred are lost souls. The Lord is saying that He looks for one of those hundred; not all of them are lost.

There Is One Lost Soul in a Hundred; Do You Know How Hard It Is to Find That Soul?

It is a case of having to find one soul among a hundred people. It is a hundred to one. Is that easy or not? It is really difficult. We are also preparing the preaching of the gospel and are looking for people like that. There are really a lot of people, and the question is who the lost souls are among them. God knows who the lost souls are. That’s the way it is in God’s eyes. When we meet souls, they don’t know if they are lost or not. They all think they are righteous. Of a hundred souls, ninety-nine think they are OK. Those people say the following, right? “I’m OK. I believe right, so what’s your problem? Why are you acting that way to me? Go talk to someone who doesn’t believe.”
God said that there were a hundred sheep. He left the ninety-nine in the wilderness to find the one lost sheep and He had joy when He found it. Who has been saved? It is only one sheep, that is, the lost sheep that has been saved. So, have the ninety-nine sheep been saved? The ninety-nine all died. He said He left them in the wilderness. A pack of wolves probably come and devour them all.
All the many people who believe in Jesus who wish and say, arbitrarily, that they have received the remission of sins are all headed for hell. God looks for the lost with utmost sincerity. He is saying that it is difficult to find a lost sheep. But God tiresomely does that difficult task and definitely finds and saves that lost sheep. I can’t describe how hard it is for Him to find it. I can’t explain how troublesome it is. He diligently looks for the lost sheep, crossing bodies of water and mountains, turning over forests, and wondering where they are. He wonders if they are behind big trees or perhaps in bushes. He ultimately finds them, embraces them to His chest, and returns with them on His shoulders. He returns and eats, drinks, rejoices, and has a feast with others.
My fellow believers, do you think that you have somehow been chosen and received the remission of sins when God looks for lost souls among men? No, you haven’t. God tiresomely and tenaciously looked for us until He found us. When I studied theology, I felt that I was a lost soul before God. I realized the fact that I was a soul who had never met God. I tried to find the Lord, but there was no way to find Him. I now know that my soul can’t meet the Lord on my own but that the Lord is looking for my soul to meet me. I learned the fact that I was looking for Him but that He was also looking for me. So, I came to meet Him. I was saved. I have sometimes said that I have quite a lot of friends, haven’t I? I also had quite a lot when I was attending Seminary. There were also a lot of famous people I knew. But of all those people around me, God found me. There are so many people in the world. But of all those people, He found me.
I was a person who had lost my way once. You are the same. You probably didn’t know that you had lost your way, but in God’s eyes, you were the same as the sheep that had lost their way. So, He came to find us. When you know the fact that you are lost souls that have not yet been able to meet the Lord, He finds you and meets you through His Word, His Church, and His servants. The Lord thus finds you and me, has a feast, and rejoices.
I can’t explain how hard God tries to find these lost souls and how much joy He has after He has found them. We must know and realize what God’s heart is like. How hard is it for a lost sheep to find its master? Likewise, how hard is it for us to find God? Of course, we have tried to meet God ourselves. We have even believed in several religions. But it doesn’t work. We suffer all kinds of afflictions. However, most people who try to look for God can’t meet Him. It is really difficult even if they try all kinds of things. I’m sorry to say this, but you must know how worthless a human being is. You must first know what kind of person you are, feel the nothingness of life by uselessly trying this and that religion, and become a person who sincerely looks for God for the first time to barely see Him. It is not easy for us to find and meet God.

We Have Struggled to Meet the Lord of Righteousness