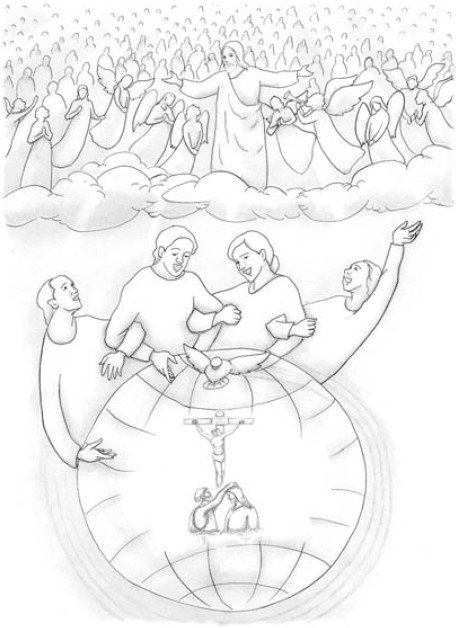 (Luke 16:1-13)
“He also said to His disciples: ‘There was a certain rich man who had a steward, and an accusation was brought to him that this man was wasting his goods. So he called him and said to him, ‘What is this I hear about you? Give an account of your stewardship, for you can no longer be steward.’ Then the steward said within himself, ‘What shall I do? For my master is taking the stewardship away from me. I cannot dig; I am ashamed to beg. I have resolved what to do, that when I am put out of the stewardship, they may receive me into their houses.’ So he called every one of his master’s debtors to him, and said to the first, ‘How much do you owe my master?’ And he said, ‘A hundred measures of oil.’ So he said to him, ‘Take your bill, and sit down quickly and write fifty.’ Then he said to another, ‘And how much do you owe?’ So he said, ‘A hundred measures of wheat.’ And he said to him, ‘Take your bill, and write eighty.’ So the master commended the unjust steward because he had dealt shrewdly. For the sons of this world are more shrewd in their generation than the sons of light. And I say to you, make friends for yourselves by unrighteous mammon, that when you fail, they may receive you into an everlasting home. He who is faithful in what is least is faithful also in much; and he who is unjust in what is least is unjust also in much. Therefore if you have not been faithful in the unrighteous mammon, who will commit to your trust the true riches? And if you have not been faithful in what is another man’s, who will give you what is your own? No servant can serve two masters; for either he will hate the one and love the other, or else he will be loyal to the one and despise the other. You cannot serve God and mammon.’”

What Kind of Kingdom Did God Give to Us?

Our Lord said, “How could I entrust such great work to one who is not faithful with material things.” He is saying that God would not give material things to a person who is not faithful to the Kingdom of God that he will enter and live eternally in the future. Therefore, we who believe in the gospel of the water and the Spirit live a new life of righteousness that is different from people in this world. We live by faith in the righteousness of God. The people of this world live according to the principles of nature, but we live to build the Kingdom of God instead of living like that. Therefore, we live as the workers of righteousness for God’s Kingdom. As you and I live in this world, we discern what the right way to live is. We can understand this instantly if we ponder on, “What do we live for when we live by faith?” However, we must be aware that there are times when we live an inadequate life without thinking about the proper faith.
Therefore, living in this world would be so arduous if we did not know that we were workers of the Kingdom of God. God saved us from the sins of the world with the gospel of the water and the Spirit. We praise earnestly the righteousness of God that saved us from the sins of the world by believing in the righteousness of God, that God cleansed our sins by receiving the baptism from John the Baptist unilaterally, saved us from the judgment of sins, and that He sits at the right hand of the throne of God and still helps us. God really loved us. Now, we must be thankful over and over again that we have become the workers who are called to build the Kingdom of God.
You and I are the workers for the Kingdom of God. We have been enlisted to do the work of building the Kingdom of God and you and I live all our lives for the righteousness of God because we are workers of the Kingdom of God. The housewives do laundry, do dishes, and cook food, while the husbands work in companies, make money, pray, and live the spiritual life. All these things are for building the Kingdom of God. You and I are living as the workers of the Kingdom of God.
The Lord says, “But seek first the kingdom of God and His righteousness.” This Word is telling us to build the Church of God, as we know well. We build God’s Church, bring souls and preach the gospel to them in order that they receive the remission of sins. We have them stay in the Church and surrender to Jesus Christ our God, and make them praise, applaud, and serve Jesus Christ. We build the Kingdom of God to do these works. We live with such purpose.
The Gospel of Luke 15 tells us about the work of finding the lost souls with three parables. The first one is the parable of the sheep: “What man of you, having a hundred sheep, if he loses one of them, does not leave the ninety-nine in the wilderness, and go after the one which is lost until he finds it? And when he has found it, he lays it on his shoulders, rejoicing.” The second one is the parable of the lost coin: “What woman, having ten drachma, if she loses one drachma, does not light a lamp, sweep the house, and search carefully until she finds it? And when she has found it, wouldn’t she celebrate with her neighbors?” The third one is the parable of the lost son: “A second son went out to the world after receiving wealth from his father, and wasted it all and then returned home from the world. So, his father rejoiced and celebrated because his son who was dead returned.”
All three of these parables are about saving lost souls by witnessing the gospel. These parables demand us to witness the gospel to the lost, bring them to God’s Church, have them receive the remission of sins, and praise Jesus Christ the King who saved them in the Church. The parable of the second son returning home after living a life of debauchery illustrates his seeking the righteousness of God in the Church. The second son implies God’s worker who does not have his own righteousness and does not have his own goodness, and all his own have been shattered and is even ashamed to return to the Father as a son. Therefore, he asks to become a servant. Such a worker, whose own righteousness has broken down completely, only boasts of the righteousness of God.

You and I Are Workers of God’s Kingdom

Moreover, This Is the Age of the Confusion of Values