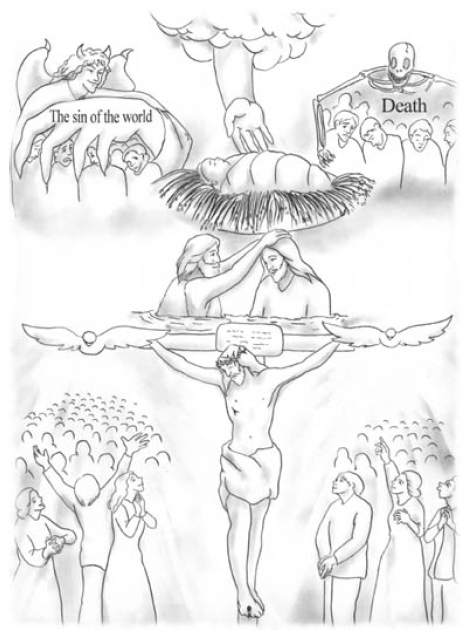 “Death, Where Is Your Sting?”

Jesus declares to death and to the Devil. He said, “The sting of death is sin, and the strength of sin is the law.” Like this, it is sin that drives every sinner into hell, the eternal death. For sinners like us who will die from the sting of our own sins, God the Father planned to send His Son Jesus as the Savior of all humankind and to pass over all these sins onto Jesus. This plan was fulfilled by the crucifixion of Jesus after being baptized by John the Baptist. We can find God’s righteousness at the scene of Jesus’ baptism. It is written in Mathew 3:15, “Permit it to be so now, for thus it is fitting for us to fulfill all righteousness.” This passage means that it is most proper for Jesus to take all the sins upon Himself by the baptism received from John the Baptist. In other words, Jesus had to receive baptism from John the Baptist, which took away the sins of the world to the Cross, died there, was buried, and rose up again from the dead just so that He could save all humans from all their sins. Sin leads to death. Now death cannot rule over the believers in this Truth since Jesus Christ took all the sins of the world and died on the Cross and rising again from death. “As it is appointed for men to die once, but after this the judgment” (Hebrews 9:27). We were the wretched beings destined to hell without exception. Nonetheless, our Lord so loved us and transformed us, we the believers of the gospel of the water and the Spirit, into His children who will never die.
We need to understand what the writer of the Book of Hebrews meant in the verse. Those who have received the remission of sins by understanding and believing in the righteousness of Jesus do not have any sins. Sins cannot even linger around them, but instead everlasting life is waiting for them. God the Father even tells us that He sent His Son to this earth in order to set free those who are imprisoned and enslaved by death. Only those who believe in the gospel of the water and the Spirit do not have sins but have eternal life.
Can sins remain intact in our hearts when we believe in the gospel of the water and the Spirit? No! Not a fragment of sin can remain intact in the hearts, we who believe in the gospel of the water and the Spirit. No matter how Satan tries to deceive us, sin is not found in our hearts. Thankfully, the Lord granted us this great opportunity to hear the gospel of the water and the Spirit so that we could receive the remission of our sins.
The curse of death cannot be found in those who are born again by believing in both the baptism and the blood of Jesus. However, sins still remain intact in those who do not know the gospel of the water and the Spirit. They will pay the price for their ignorance, if they do not receive the remission of sins by believing in the gospel of the water and the Spirit. For this reason, the slaves to death who are enslaved by the power of the Devil must receive the remission of sins. Sinners always tremble with fear. They are afraid of their physical death. They live their whole life as a slave to death, fearing the judgment after their physical death.
On the other hand, those who believe in the gospel of the water and the Spirit will enter the Kingdom of everlasting life. The righteous are not afraid of anything except for living a dishonorable or disgraceful life before God. When people are sick, they get dreadful about death. The righteous, however, are not worried about their deaths. It is because God is alive in their hearts. When Jesus was on this earth, He said, “You believe in God, believe also in Me” (John 14:1). What is there to worry when God is going to take care of all His children?
“For Indeed, He Does Not Give Aid to Angels”
It is written in the Bible that God did not send Jesus to help angels, but to help the descendants of Abraham. Then who are the descendants of Abraham? God said to Abraham, “In your seed all the nations of the earth shall be blessed, because you have obeyed My voice” (Genesis 22:18). Here, “your seed” refers to Jesus Christ, but it also refers to anyone who believes God’s Word just as Abraham did. Spiritually speaking, the descendants of Abraham are the righteous people who have received the remission of their sins by their faith in the righteousness of Jesus Christ. Such heirs of salvation have the desire to put their faith in the righteous work done by Jesus Christ and to be saved, even though they are bound in their flesh and bound to die due to their sins. God the Father sent His Son Jesus Christ for such people.
It is written, “Inasmuch then as the children have partaken of flesh and blood, He Himself likewise shared in the same” (Hebrews 2:14). We, who believe in the gospel of the water and the Spirit, are sons of God the Father. The Word of God states that Jesus Christ is our Savior and at the same time He is our Eldest Brother. This is incomprehensible for those who do not believe in the gospel of the water and the Spirit.

What Did Jesus Christ Do on This Earth?

Jesus did everything as a merciful and faithful High Priest before God. Jesus Christ is the faithful High Priest in the Kingdom of Heaven. We call Him the faithful High Priest because He has saved all humans by being baptized by John the Baptist, was crucified, and was resurrected from the dead. He is the one and only faithful High Priest to all humans.
In the time of Old Testament, the High Priests offered sacrifices to atone for their people’s sins. Without them making propitiation for their sins, there was no other way for the people to receive remission of sins. And only Aaron and his descendants could be High Priests. But in the age of the New Testament, Jesus became the merciful and faithful High Priest of Heaven according to the order of Melchizedek (Hebrews 5:10).
Nevertheless, Jesus Christ was born in human flesh just like us. While Jesus was on the earth, He had to pray to God just as we do. Jesus lowered His status to save us from sins and offered fervent prayers to God for help just like we do. He Himself became the merciful and faithful High Priest, and gave Himself as the Lamb of God to spare whoever He wanted to spare and to condemn whoever He wanted to condemn. Just as the High Priests of the Old Testament era made sacrifices for the Israelites, the Son of God, Jesus Christ saved His people from all sins, by carrying all our sins on His body and giving Himself to God as the sacrifice for all mankind. The name Jesus means the Savior as it is written, “You shall call His name JESUS, for He will save His people from their sins” (Mathew 1:21). Jesus was born to make us God’s people and do the work of salvation. Then He incites people to have a desire to receive the remission of their sins.
The Kingdom of Heaven is coming near to those who believe in the gospel of the water and the Spirit. And in this Kingdom, there is the Triune God―God the Father, the Son and the Holy Spirit. There also will be God’s people. Only those who have been saved by the righteousness of Jesus Christ will be able to dwell there with God the Father, the Son and the Holy Spirit. To save His people and live with them forever in this paradise, God the Father sent His own Son as the faithful High Priest. God the Father washed us clean with the water and the blood of His own Son, not with the blood of animals.

No Matter How Fervently People Offer Prayers of Repentance, the Holy Spirit Does Not Come by That