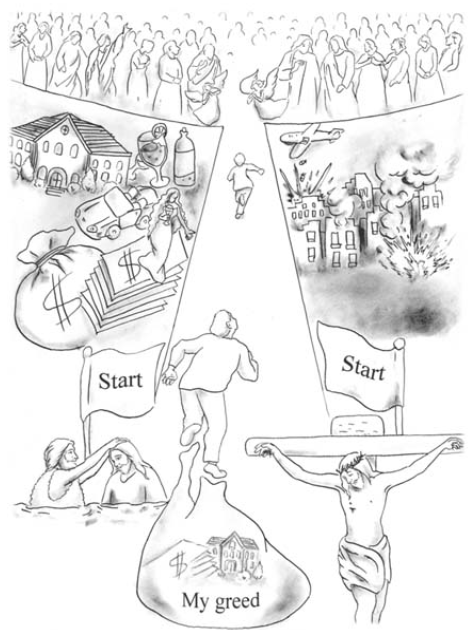 (Hebrews 11:1-12)
“Now faith is the substance of things hoped for, the evidence of things not seen. For by it the elders obtained a good testimony. By faith we understand that the worlds were framed by the word of God, so that the things which are seen were not made of things which are visible. By faith Abel offered to God a more excellent sacrifice than Cain, through which he obtained witness that he was righteous, God testifying of his gifts; and through it he being dead still speaks. By faith Enoch was taken away so that he did not see death, and was not found, because God had taken him; for before he was taken he had this testimony, that he pleased God. But without faith it is impossible to please Him, for he who comes to God must believe that He is, and that He is a rewarder of those who diligently seek Him. By faith Noah, being divinely warned of things not yet seen, moved with godly fear, prepared an ark for the saving of his household, by which he condemned the world and became heir of the righteousness which is according to faith. By faith Abraham obeyed when he was called to go out to the place which he would receive as an inheritance. And he went out, not knowing where he was going. By faith he dwelt in the land of promise as in a foreign country, dwelling in tents with Isaac and Jacob, the heirs with him of the same promise; for he waited for the city which has foundations, whose builder and maker is God. By faith Sarah herself also received strength to conceive seed, and she bore a child[b] when she was past the age, because she judged Him faithful who had promised. Therefore from one man, and him as good as dead, were born as many as the stars of the sky in multitude—innumerable as the sand which is by the seashore.”
A warm greeting to you all! We have just read Hebrews 11:1-12 for this evening’s service. As you all know, this passage speaks about having faith in God. The writer of the Epistles to the Hebrews defined faith succinctly as the following: “Now faith is the substance of things hoped for, the evidence of things not seen” (Hebrews 11:1). The words, “faith is the substance of things hoped for” means that if we believe God will give us what we hope for, then this will indeed come to pass. That is why our predecessors of faith believed in God wholeheartedly even though He was not visible to their naked eyes.
They believed that God created the whole universe and all its hosts with His Word. This is why they could put all their trust in Him, follow Him, live by faith, and believed unreservedly that He alone was right. That’s why Abel offered to God a more excellent sacrifice than Cain his brother. And by faith Enoch was taken away without seeing death. The Bible says that Abel and Enoch lived a life that was pleasing to God. In the same sense, Noah prepared an ark by faith, being divinely warned of things not yet seen, and in doing so he saved not only himself, but also his whole household. Noah thus became a righteous worker by faith.
When Abraham was called by God, he left his homeland by trusting in God alone, even though he did not know where he was going. Also, Abraham and his heirs lived as journeymen in this world, knowing that they would one day see the Lord face to face. Moreover, Abraham passed down his faith to his descendants, and according to this faith he was embraced in the Lord’s arms. His wife Sarah, who was too old to give birth, also believed that God’s Word was faithful, and on account of this faith, she was blessed to bear as many descendants as the stars in the sky.

What Did Our Forefathers of Faith Believe in?

If Our Purpose in Life Is Clear and Godly in the Lord’s Sight, We Can All Pray to God Earnestly

My fellow believers, all those who lived by their faith in God, lived by the kind of faith that was pleasing to God. Samson was chosen by God even while he was still in the womb of his mother. He was God’s elect. But how was his life? Even though Samson was chosen by God to be Israel’s leader, somewhere along the way he lost his purpose in life and consequently faced a great deal of hardship. Despite the fact that Samson was God’s chosen leader for the people of Israel, he succumbed to his personal weaknesses and failed to fulfill his duty, and the result of this failure was untold suffering for not only Samson but also for the entire people of Israel.
Samson himself was captured by the Philistines and his two eyes were gouged out, while the Israelites suffered oppression under the yoke of the Philistines. Even so, Samson turned around at the last moment and prayed to God while standing in a Philistine temple, “Lord, give me back my strength. Allow me to deliver the people of Israel from the Philistines.” With this prayer, Samson pulled the two pillars of the temple, and the whole temple came tumbling down.
The Scriptures write that Samson killed many more Philistines at this time while dying than while he was alive. As a result of this, the people of Israel were freed from the oppression of the Philistines. Like this, God hears our prayers when our purpose is clear. And when we set our purpose, we must set it to God’s pleasure in congruence with His will, rather than our own private wishes. When we pray to God for His glory like this, God will surely answer our prayers.
Most of you here probably know Brother Seongjing from the Chungju Church. He is the husband of Sister Miae. Brother Seongjin, after leading a life of faith, fell into the temptation of the world awhile ago and ended up leaving the Church. After leaving the Church, he bought a truck and ran a delivery business, but he had a serious accident and lost tens of thousands of dollars as a result. His financial situation got so bad that collectors began calling his home day after day. His mother eventually sold some of her real estate to pay off these creditors.
Even after this, Seongjin turned to his mother whenever he needed money. His mother was so heartbroken and worried that she cried all the time, and couldn’t sleep or eat. Yet, even as she was overwhelmed by grief, she still had a purpose for her faith before God: She yearned for her son to return to the Church, lead a life of faith once again, and to serve the Lord. So, with this purpose in mind, she prayed long and hard. Whenever I met her at one of our spiritual retreats, I would ask her about her son, and she would tell me that not much had changed. She would then ask me to pray for her for son, and we would pray together, holding hands in agreement.
Some of our ministers deplored Brother Seongjin, saying that he was hopeless and we should just give up on him. However, even if no one else believed, his mother believed with all her heart that her son would return to God without fail and resume his life of faith before her time was up. After a few years, Brother Seonjin did in fact show up in the Church. At first, he was just testing the water, but in time, his heart was fully convicted to return to the fold of the Church. He eventually married Sister Miae, a faithful servant of God, and is now living a happy and prosperous life in God’s Church.
This, my fellow believer, is what true faith is all about. If our faith’s purpose is clear, and if this purpose is good in God’s sight, then He will surely listen to our prayers and bless us to achieve that purpose. He will listen to us on account of our faith. This is indeed the case. The same principle applies to God’s Church as well. It’s because God’s Church has a clear purpose that He makes it possible for us to fulfill that purpose.
When God’s Church makes it it’s purpose to preach the gospel of the water and the Spirit all over the world; when we yearn for God to achieve this; when we believe that He will accomplish this; and when we pray to Him by faith like this, then we can see God’s work unfolding right before our eyes. And we will continue to see it unfolding. Like this, living by faith in God, is all about setting a clear purpose, that’s pleasing to God, and praying for this purpose. That is how the people of faith lead their lives.

When Our Purpose Is Not Clear, Our Prayers Are Not Earnest