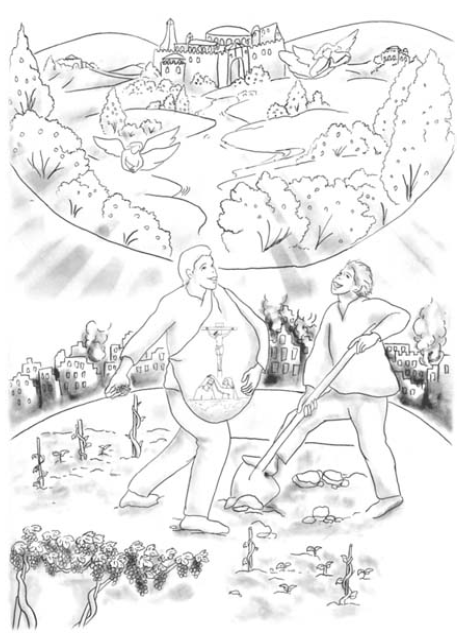 (Hebrews 11:6-7)
“But without faith it is impossible to please Him, for he who comes to God must believe that He is, and that He is a rewarder of those who diligently seek Him. By faith Noah, being divinely warned of things not yet seen, moved with godly fear, prepared an ark for the saving of his household, by which he condemned the world and became heir of the righteousness which is according to faith.”
This Wednesday evening I will be preaching from the Book of Hebrews, and I will be speaking to you about having faith in God. As we all have read the Word of God together today, it is saying to us, “Faith is the evidence of things not seen.” It is telling us that “faith” is to lead a life of believing, by the faith in the Word of righteousness as spoken by God which isn’t visible to the naked eye. It is necessary for us to lead our lives of faith by properly knowing what it is. In other words, for us to lead this kind of life we must know what kind of faith is the true faith.

Do You See Scripture as the Word of God?

If we want to discuss about having faith and believing in God in the right way, we cannot but first speak about knowing the Word of God, and about the correct faith of believing in the righteousness of God. Our God is a God that cannot be seen with our naked eyes, but He indeed lives and exists for all eternity. This God is written about in the Bible. Hence, we as Christians should put our faith in the written Word of God.
When we watch some Christian TV programs, it shows us about the Old Testament in images during its Bible hour. When we watch a program like this, we must consider the custom and the historical background as shown in the Bible.
This passage of Scripture that we read has 400 writers. The Bible was recorded by the scribes who were appointed of God and wrote things as they were moved by the Holy Spirit. They were human beings just like us, but they recorded the Words of God having their hearts moved by the Holy Spirit. And so, when we read the Scriptures we can see what God, the author of the Bible, and the servants of God have recorded for us.
The person who recorded Genesis through Deuteronomy was Moses. If so, was Moses someone who was born during the creation of the heavens and the earth? No, of course he wasn’t. God merely had Moses record His will by speaking to his heart through His Spirit. And we, who believe in the Word regarding the gospel of the water and the Spirit, should once again think about whether or not this passage of Scripture is in fact the Word of God. Because it was recorded by the servants of God, having been moved by the inspiration of the Holy Spirit, how could we say that this is not the Word of God? We can see that the Scripture was recorded by those who have been moved by the Spirit of God, and it is the Word of God, not the words of mere human beings.
Let’s look at an example. When thinking about the Apostle Paul’s ministry; if he was a married man, could he have carried out the ministry like us today, and would he have been able to fully fulfill the duties of an Apostle as sent by God? He would not. What would have happened to his ministry if he had not fully carried out the work of God through the guidance of the Holy Spirit? Have you ever thought about this? The Apostle Paul could have very well been able to marry and carry out the ministry, but God had wanted to fulfill His will by using Paul in a special way. Because Paul was a man who was set aside by the Spirit of God, he couldn’t spare the time to think about fleshly things, and even if he had occasionally come across some spare time to do this, he was a man who couldn’t dwell on such things.
Paul, a servant of God was being used by God for a special purpose. While he lived, he wrote letters to the Churches of God and his fellow workers when he was carrying out ministry work among the Gentiles, and he made sure that when people read the content of his letters, they would know that these words were the will of God. What the Apostle Paul said to the Churches in his letters lacked nothing but for us to accept them as the Word of God. Having turned a mere man into an instrument of His righteousness, God found joy in showing His will through this man.
Is this passage of Scripture the Word of God, or is it not? If someone were to challenge us about this subject asking if it were true, we could say, Yes, without any hesitancy that this passage of Scripture is the Word of God, for it was spoken by the servants of God who were being moved by the Holy Spirit. Why? It is because God had shown His will through His people, that is, through His servants by holding onto them like that. However, today’s neo-theologians and the followers of higher criticism are surging up a chaos, for they do not understand the Word of God, as the Word of God.

Among Those Who Believe in Jesus as a Religion, What Is Their Purpose for Believing?