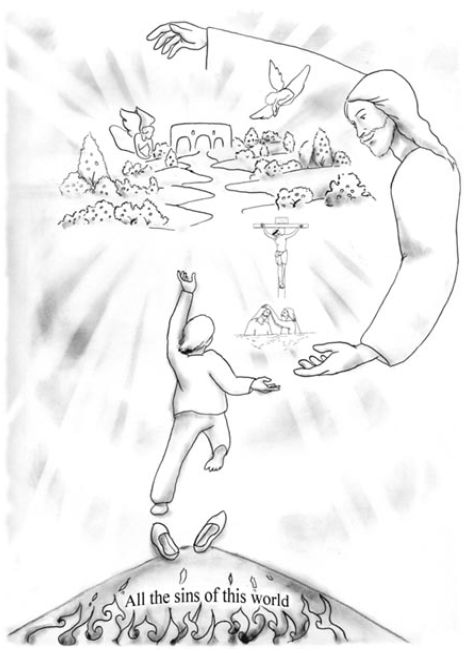 (Hebrews 11:7)
“By faith Noah, being divinely warned of things not yet seen, moved with godly fear, prepared an ark for the saving of his household, by which he condemned the world and became heir of the righteousness which is according to faith.”

What Is Living by Faith?

God tells us that Noah became an heir of righteousness who did righteous work and left a legacy of righteousness. Noah’s faith was to trust God’s words utterly and to believe in the invisible God. Trusting and obeying God’s words is faith. Therefore, Hebrews 11:7 says, “By faith Noah, being divinely warned of things not yet seen, moved with godly fear, prepared an ark for the saving of his household, by which he condemned the world and became heir of the righteousness which is according to faith.”
Noah believed what God said to him, and prepared an ark being warned of things not yet seen. During the time of Noah’s days on earth the ways of people were cruel and violent. Just like the survival of the fittest, the strong devoured and extorted the weak. There was no law, and there was no such thing as protecting the weak. Only the strong could survive. The world reached to the point where violence was so great that people couldn’t survive. Finally God warned them that He would sweep the world away with water and judge them. God said to Noah, “Make an ark for yourself and your family. Go into the ark. I will then destroy the world with water but you will be safe.” So Noah obeyed God and built the ark according to Gods plans.
As you know, an ark is a large wooden container. God said, “Make an ark and go into it.” Being delivered from your sins is similar to this. Noah prepared an ark, being warned about things yet to be seen, so he could save his family and the animals on the earth. Because of his obedience Noah became an heir of righteousness. When we look at his life, we can learn how to trust God and to follow Him. The Bible says that Noah trusted in the invisible God, and did everything according to His word out of fear and respect.
The Bible is the record of people who lived by faith in God. In this age, it is impossible to watch over one’s heart or live by faith without having faith. How can anyone live without faith in God? How can we live by faith when the virtues, morals, and the yardstick of the world are changing? People who live by faith live like Noah did. Noah was a human being just like us, but he trusted the invisible God purely based on what God told him. Genuine faith is to believe in God just as if you are seeing Him, and to believe that He is alive and accomplishes His will.
God told us that this time He would destroy this world with fire, and if we are people who live by faith, we must believe that His words will come true. We also need to prepare an ‘ark’ by faith just like Noah did. Living a life of faith means to trust the invisible God and put our faith in His words and live accordingly to them. The Bible says that Noah did everything according to what God told him. God said to Noah, “Bring two of every sort of animals and I will keep them alive,” and he obeyed. Know this; the times we are living right now is as wicked as the time of Noah.

We Are Living the Life of Noah

Even though we can’t see God with our physical eyes, we follow Him by faith as Noah did, for we believe that He exists and His words are the truth; and what He said will indeed come true. Trusting in God’s righteousness is like this. The conclusion of the matter is, ‘faith is to trust, follow God’s word and to live an obedient life towards God’s word just as Noah did’. ‘Faith is to live like Noah. It is to live like Abraham. It is to trust God as Abraham and Noah did. Faith is just like that.’ Do you understand? In fact, faith is assurance. Being sure of what is invisible is… faith.
Since we are human beings, we have weaknesses in living a life of faith. But those who truly believe in God distance themselves from those who do not believe in the righteousness of God. The Bible says Noah prepared an ark. We shouldn’t interpret his behavior literally, but rather, have the same faith he had. “Whoever trusts the invisible God and follows His Word belongs to God’s household. Who is our family? Aren’t those who are truly born again of the gospel of the water and the Spirit our brothers and sisters?” Family means not only our physical family but also our spiritual family who are united with the Church of God, and who believe in the gospel of the water and the Spirit.
We are truly God’s family if we live by the faith in God. Do you all have physical families? Yes? Looking at them, if you truly lived by faith, whose side would you take, your physical family, or your spiritual family? In such a situation, living by faith is to stand on God’s side. A man who lives by faith lives like Noah did. He trusts in God as Abraham did.
Therefore, a life of faith is living like Noah. It is also living like Abraham who followed God’s word. It is also living like Isaac who obeyed God. Living by faith is living the same kind of life that our forefathers of faith had lived. This is how we should live, do you agree? One thing to always remember is, although it is okay to have weaknesses, we should be careful not to do anything harmful to the Church of God because of our weaknesses.
You all must know that we all have weaknesses. I have an older brother who will not accept the word of God even as I tried to show him the truth in Gods Word. But even so, I still keep doing my best to share as much as I can when the opportunities present themselves. He does not oppose me in person, but apposes God’s word by rejecting the righteousness of God. That is why I keep praying and exhorting to him to believe in the gospel of the water and the Spirit. But the reality is, because I truly believe in the righteousness of God, I cannot live in unison with my brother. On the other hand however, if I did not believe in God’s righteousness, I could be united with him regarding worldly things.
Like this, you cannot be united with your physical family if you truly believe in God’s righteousness and they don’t. Even though they are your flesh and blood family, you cannot be in union with them. The reason is crystal clear; their belief is completely different from our beliefs. Again, living by faith means to live for the righteousness of God. Out of the fear of God and His Words, Noah built the ark, stored food in it, and took live animals into it also just as God had told him. God said then He was going to destroy the world by flooding it with water due to man’s absolute wickedness. But today God says He will, this time, burn the world up completely. So like Noah, He is warning us to prepare for our spiritual salvation. God told Noah to prepare an ark for his family, the people, and all the animals. And so Noah obeyed God and prepared the ark. And by him, doing this by faith, he spread new seeds of life in the world.
The same thing holds true for us also. Just as Noah built an ark by faith, we too, by faith, build the ark by sharing the gospel of the water and the Spirit with people everywhere. We are bringing many people into the ark by doing this. People with such faith live a life that is pleasing to God. They do not necessarily live like monks who supposedly have great knowledge of God’s word while chanting, or fasting and praying all day long, but they live their lives by faith, just like Noah and Abraham did. And by faith we preach to the world this perfect gospel of the water and the Spirit that saves perfectly.

We Are Building Arks All Over the World