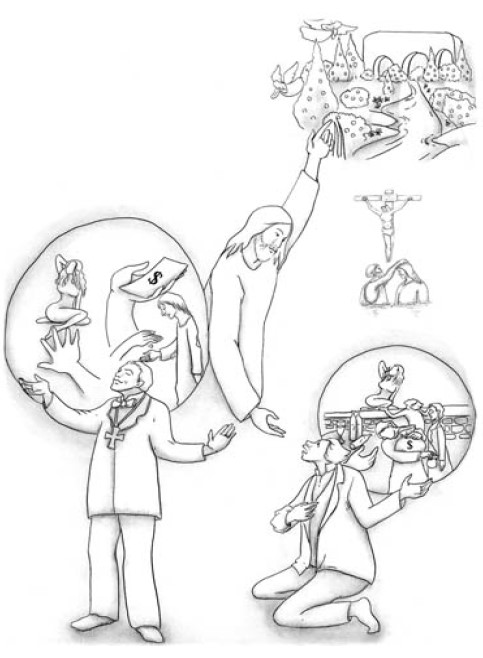 This Word was actually spoken to the rich young man who had asked, “Good Teacher, what shall I do to inherit eternal life?” This young man was a ruler. His faith was bound by his own acts. Jesus said, “Why do you call Me good? No one is good but One, that is, God.” Of course, Jesus said so here because in the ruler’s view, Jesus was just a good teacher. The rich ruler saw Jesus just as one of the respected sages in this world, like Socrates, Plato, Buddha, and Confucius. That’s why Jesus said, “No one is good but God.” In other words, He made it clear here that human beings are absolutely devoid of virtue.
Do you also see Jesus only as a human being? Jesus is God Himself. He is also the Son of God the Father.
Our Lord said to the rich young man, “You know the commandments: ‘Do not commit adultery,’ ‘Do not murder,’ ‘Do not steal,’ ‘Do not bear false witness,’ ‘Honor your father and your mother.’” The rich young man then claimed that he had kept all these commandments. This means that he had kept all the Word of the Law of God with his acts. He had not committed adultery, nor murdered anyone, nor stolen, nor born any false witness, and had honored his parents.
However, far from praising the man, our Lord said to him, “You still lack one thing. Sell all that you have and distribute to the poor, and you will have treasure in heaven; and come, follow Me.” The Bible says, “But when he heard this, he became very sorrowful, for he was very rich.” That’s why Jesus said, “It is easier for a camel to go through the eye of a needle than for a rich man to enter the kingdom of God.” Jesus’ point is that the young man had to be poor in heart. In other words, for those whose hearts are filled with the things of the world, the gospel salvation of the water and the Spirit offered by our Lord cannot enter their hearts. Nor is there any room for our Lord’s Word of life, the Word of the remission of sins, to enter. The young man in today’s Scripture passage was rich in both his flesh and his acts. He was a self-righteous man. So it was a forgone conclusion that this man would not accept Jesus as his Savior, nor have the eyes to recognize Him as such. After all, his heart was already filled with the things of the world, and so how could Jesus have entered his heart? How could the gospel Word, which proclaims that Jesus has saved everyone through His baptism and blood from all the sins of the world, enter such a heart?
The rich young man tried to obtain the remission of his sins and eternal life through his own acts. For Jesus, in contrast, the young man’s salvation did not rest on his own acts, but on Jesus’ baptism and blood. They focused on different things. The young man thought that he could eventually obtain eternal life if he did many good deeds and kept the Word of God and His commandments, whereas Jesus, in complete contrast, was the Savior who had come to deliver those who knew their sinful nature and therefore relied on the love of God and His righteousness.
Everyone living in this world is completely devoid of any virtue. Jesus wanted the young man to say that there was no one good but God, and that every human being was an evil and inadequate sinner. But the young man’s focus laid elsewhere. He was a rich man both materially and spiritually, with his heart filled with self-righteousness and hypocrisy. So those whose hearts are rich—that is, those who are self-righteous—cannot enter Heaven, just as no camel can ever go through the eye of a needle. However, the Lord preaches a message of hope saying, “The things which are impossible with men are possible with God.” No one can enter Heaven by relying on his own righteousness and virtues or by keeping the commandments with his own acts. However, Jesus said that what is impossible with men is “possible with God.”
Indeed, the Lord died for this rich young man, for this evil man. He made him sinless by being baptized in the Jordan River by John the Baptist, the representative of all humankind, and thereby taking upon all his sins. He also bore the condemnation that the rich young man had to bear before God for his sins. Our God has saved everyone—the rich, the poor, the old, and the young alike, and even those who don’t know that God does exist.

Everyone Is Always Insufficient in Both Body and Spirit

Even Christians Are Standing against His Righteousness

There are many people living in this world. The issue facing them all is whether they actually believe in the righteousness of God, or, like this young rich man, they believe mammon as their god. If we believe in God, our possessions mean nothing. So long as we use these possessions for a good cause like the faithful steward, our riches by themselves will never constitute a sin before God. But if we regard and believe this wealth as though it were our god, then the wealth itself will turn into an idol.
Everyone’s mind is preoccupied with the riches of the world, and everyone seeks the wealth of the world. However, if you really want to follow God, your possessions should not mean much to you. You have to listen to the Word of God that says, “The silver is Mine, and the gold is mine.” Everything you have belongs to God, and you are just managing what God has entrusted to you. And if you really believe in God as your God, then you should surrender yourself to His written Word and acknowledge its teaching. If the Word says that you are a sinner, that you will commit sin until the day you die, and that you will harbor mad thoughts and do mad things, then you should admit them all and say, “Yes, I am indeed such a sinner; that is who I really am.”
The Bible says, “Can the Ethiopian change his skin or the leopard its spots?” (Jeremiah 13:23) This passage means that because we were all conceived as sinners in our mothers’ wombs, we simply cannot change ourselves on our own. We can be saved only if God Himself saves us from all our sins through the water of His baptism and His blood on the Cross. So the poor in spirit can say to the Lord, “Lord, it is Your salvation that has delivered me. It’s the water of Your baptism and Your blood on the Cross that have saved me. I accept the salvation You are offering me.”
The Bible that we now have is the holy Word written by the holy God. God had written His Word through His servants. So we say that this Word of the Scriptures is the Word of God. The Bible is also called as the Scriptures because it transcribes the sacred Word. To believe in this Word as the Word of God is to believe in God Himself.
As it’s shown in Matthew 3:15, do you believe that Jesus was baptized in the Jordan River to thus fulfill all righteousness, and that He has thereby saved us all? Do you believe that the Lord has washed away all your sins? Do you believe that He was condemned on the Cross in your place? Do you believe that Jesus died in our place, and that He rose from the dead again in order to raise us back to life? And do you believe in this God who is now sitting at the right hand of the throne of the Father, and who will come again in the future? If you do, then this means that you have been saved.
Our Lord has saved us from all the sins of the world through the baptism He received and the blood He shed on the Cross in order to deliver us from all sins. I give all my thanks to the Lord for giving us the gospel of the water and the Spirit and the righteousness of God.
Terms and Conditions Privacy Policy Cookie Declaration Contact Us