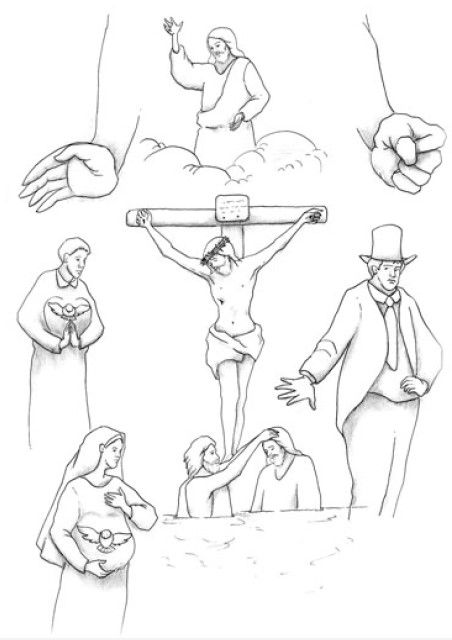 Is the Lord Really the King of the Righteous?

Then, What Attitude of the Heart Must We Have to Serve God as the King?

The behavior that appears outwardly differs from one extreme to another depending on whether we worship God as the King wholeheartedly or not. In today’s Scripture passage, the evil servant who did not serve the master as the king thought the command of the master was unjust. He though the master was certainly a robber and indecent person. He thought it was so unfair for the master to entrust one mina and expect to have five or ten fold returns. That servant did not even think of serving the master as his king and did not even have the heart to be faithful to the master because he did not believe in the master. He just thought the command that the master gave to him was unjust, and did not have faith in the reward and compensation the king would give him when he fulfilled that responsibility.
However, what consequently happened? When the other servants truly believed in the master who entrusted the work to them, regardless of how small the work was, and worked faithfully with all their efforts, the master bestowed on them great blessing and reward, didn’t he?
Among the things we enjoy, there isn’t anything we have not received from God. Even the relationship between a parent and a child was allowed by God, wasn’t it? Moreover, the brothers and sisters, the Church and the ministries in the Church, God’s work, the love in Christ, and all other things are given to us from the Lord. When we acknowledge and serve God as our King, then, we cannot but confess that all the thankful things that we enjoy like this are from God.

We Are Inadequate People

Regardless of the fact that we have been born again by believing in Jesus, we cannot be perfect as long as we are human beings. Even though we always want to do well, we make mistakes from time to time because human beings are weak beings. Human behaviors cannot but be imperfect. If human behavior could be perfect somehow, then there would not be any conflict between people, and people would not suffer from difficulties. However, in contrast to human behaviors, the faith of believing with our hearts can be perfect and complete. Therefore, the Lord looks at our hearts, not our works. If we always leave the space in our heart empty for the King and concentrate our attention on the will and the glory of the Lord only, then such heart can be accepted as perfect before the presence of the Lord. Anyone who has been born again and wants to serve the Lord inside him can have such heart.
We are all people who have such qualifications and people who can live like that. Even though our behaviors cannot be 100% satisfactory because our flesh is weak, anyone can receive the talent from the Holy Spirit and receive the blessing by doing God’s ministry with that talent if he just accepts God in his heart instead of thinking the Lord who saved you and me is the strict and awkward God and keeping distance from Him with fear. However, if someone just becomes weary of God’s work and feels that God expects too much and only complains, then such person cannot serve God as the King and hate to do any kind of work for Him.
God owns everything in this world. God willingly gives all such things to us, so we can receive them all in the Lord, enjoy them, and serve the Lord with thankfulness. We serve the Lord with the Lord’s own and we eat, drink, and go on living with the Lord’s possessions. We give glory to the Lord and we do God’s work with His belongings, and we also share them with our neighbors.
God truly is our Creator and the King. The Lord becomes our King, the King for you and me, when we believe that the Lord has saved us. We just cannot serve Him as the King properly and treat Him as the King perfectly only because our faith is lacking. The Lord becomes our King when we invite the Lord in our hearts wholly. Jesus Christ is the King for us who has received the remission of sins. You and I must definitely believe this fact. The Lord who is our King is the Christ and the Son of the living God. We are not able to serve Him 100% perfectly, but nonetheless, the Lord is our King.
However, when we start to live the spiritual life with the heart that says, “I am so tired and frustrated with unreasonable demands of serving You every day. I have offered so much to You, but You ask me to give myself to you continuously, and I cannot do that anymore” as we serve the Lord, then the Lord no longer wants to be our King. We must therefore believe that the more devoted we are and the more we do the Lord’s work, the more blessing and reward the Lord will give to us. If we do not have such faith, the Lord no longer remains our King and does not give us the blessing any more.
If we face God with the shaky faith and fleshly thinking instead of the eyes of faith, then God may some day look like a tyrant to us. However, as the master entrusted one mina to each and every servant, we must understand that if we think preciously of the little talent that is given to us and be faithful to Him, then everything turns to grace and thankfulness. We live in this world with the talent that God has entrusted to us.
That talent is not a responsibility. It is not a burden that we must bear laboriously. That talent is the seed of faith that leads us to the heavenly blessings. Everything is a gift that the Lord has given to us. When we look carefully at the things that are given to us, there isn’t anything that the Lord did not give. The Lord even gave us our life and we would just become a handful of dust if the Lord took that life.
In today’s Scripture passage, the reason why certain servants that received one mina reaped much and certain others did not is not any other reason than the difference of whether one has served the master as the king wholeheartedly and obeyed the master absolutely or not. The servant who reaped five, the servant who reaped ten, and the one who reaped nothing have each reaped such fruit by using their respective ability. As we receive salvation by faith as small as a mustard seed, the result of the work we do with our abilities can be different like that depending on the size of our faith. However, the evil servant that brought one mina intact received the unfortunate consequence eventually because he did not do any work and he did not serve God as the King.