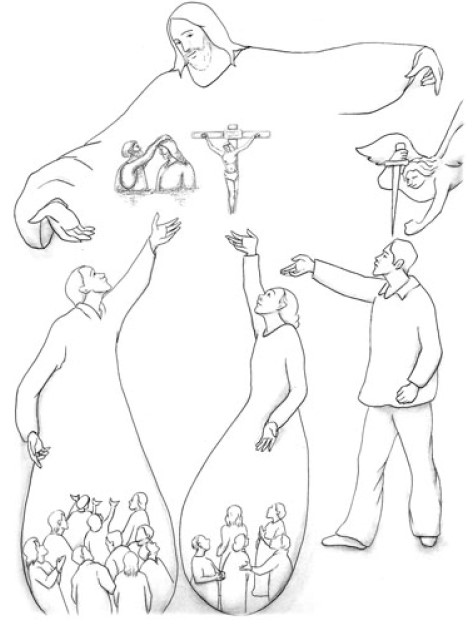 Who Are These People Today?

Based on what we have read today, we are going to think about the righteous judgment of our Lord. I will begin with a hopeful prayer that we will all receive the rewards at the end as the Lord promised.
These days I am busy finishing my books. I believe this is serving the righteous gospel of the Lord, too. Once we start something, it is better to finish it as quickly as we can; but there are times we can’t do so. We are also going to publish the German editions of our third book and the first commentary book on Romans. We will also publish a commentary book on Apostles’ Creed titled, “The Elementary Principles of Christ.” I believe those books will help numerous people around the world to serve the gospel once they are released to the world in different languages.
In today’s passage, Jesus tells His disciples a parable. There are verses saying, “A certain nobleman went into a far country to receive for himself a kingdom and to return. So he called ten of his servants, delivered to them ten minas and said to them, ‘Do business till I come’” (Luke 19:12-13). And there is a verse saying, “We will not have this man to reign over us” (Luke 19:14). This parable given by the Lord was meant to give us, that is, God’s Church a precious lesson.
As it is written, the nobleman gave one mina to each and every servant, asked them to make a profit by doing business, left for a far country and came back. Among them, one servant gained ten minas by trading; and another servant earned five minas. But one of the ten servants didn’t do any business but kept the money in his handkerchief. As he handed the money back to his master, he said, “I consider you as an evil man. So I fear you. You try to collect what you did not deposit, reap what you didn’t sow. I have hidden the money in my handkerchief. Just take what you gave me and do not say anything.”
Then what action did the master take? He praised the servant who gained ten minas, and gave him ten as his reward; he complemented the servant who had gained five minas saying he was faithful and the master rewarded him with five cities. But to the servant who kept the money in his handkerchief and gave it back to the master, he said, “Take the mina from him, and give it to him who has ten minas.”
The man who returned just one mina was the servant who didn’t want the master to be his king. What can we find out through this passage? We can see that there are people who believe in Jesus Christ but do not want Him to be their King. They act the same way as the servant who returned just one mina did and, as a result, they will be punished accordingly.
On the other hand, how about those who trust in Jesus and follow Him as their King? Those people faithfully do businesses and make a lot of profit; as a result, they receive much praise and blessings.

What Do People Think of Jesus When They Do Not Know His Righteousness?

The disloyal servant who returned just one mina didn’t consider Jesus as his King or his God. In other religions such as Confucianism, Hinduism and Buddhism, human beings are the kings. In other words, human being is considered as gods. For example, how is the god of Hinduism? They believe that dying to oneself completely can lead to the awakening of oneself. They get to realize that there is a god within them. That is how they reach supreme enlightenment or Nirvana. That is the highest stage where they empty themselves completely and do not feel any ego. According to them, when they do not feel any human emotions and feelings such as hunger or thirst and when they don’t even have any thoughts, they can reach the stage of god. They argue that those people at the stage of god will be reincarnated into a wealthy family and become a man of virtue who will do a lot of good work for others. They believe that human beings can become gods if they die to their own thoughts and opinions.
While Hinduism focuses on the next world to come, Confucianism emphasizes on the present world. Confucianism is a religion, which pursues the well-being of human beings in the present life; not getting sick, not doing bad things, educating children well and so on are their main concern. Buddhism is similar to Hinduism, and they argue that those who reach the highest enlightenment and become reincarnated right away will be good people. According to them, they can be reincarnated in the next world as a good person and reach the stage of god and do good works for people as long as they pay for their wrong doings of their past world by doing the good works.
The common divider of all these religions is “human-centered ideology.” With those religions, human is the king. Human is the god. And human is the center of everything.
However, Christianity is different. We have the Creator, who made everything including you and me. We believe that we are His creatures, and He came to this world for us, received the baptism, died on the Cross to save all human beings. It is our doctrine that God delivered us from sin, death, destruction, curse and the Devil, and adopted us as His children. Whoever believes in Jesus believes this.
However, there are still so many Christians who are like the disloyal servant who returned just one mina. Even though they know that Jesus is their God and King, they do not want to serve Him as their King. How do they comprehend Jesus in relation to themselves? They think that they are the kings in their heart’s throne and that Jesus appears as a king only when they need help from Him. Unfortunately, there are such people even in our Church. Even among those who are born again by the gospel of the water and the Spirit, some people think the same thing.
When we become born-again by believing in the gospel of the water and the Spirit, we also receive the remission of sins and the Holy Spirit as a gift; and those who receive the Holy Spirit after receiving the remission of sins become the children of almighty God. Nonetheless, there still are some saints who do not want Jesus to reign over them. Isn’t that a problem? Even such people, however, cannot deny the fact that He also is the King to them. It is because the Lord is the King of all humankind, but some people do not acknowledge the fact.