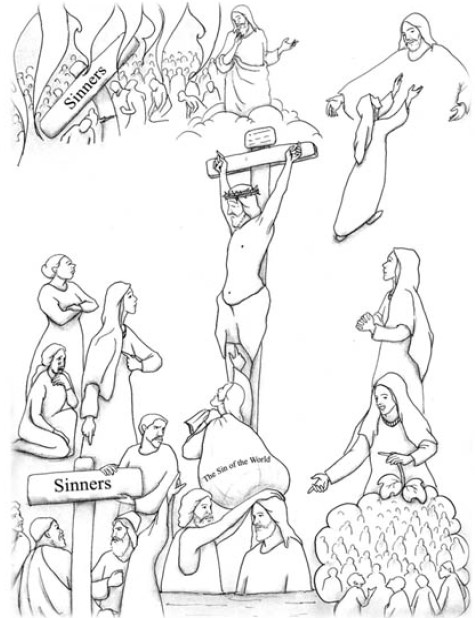 (Luke 23:26-38)
“Now as they led Him away, they laid hold of a certain man, Simon a Cyrenian, who was coming from the country, and on him they laid the cross that he might bear it after Jesus. And a great multitude of the people followed Him, and women who also mourned and lamented Him. But Jesus, turning to them, said, ‘Daughters of Jerusalem, do not weep for Me, but weep for yourselves and for your children. For indeed the days are coming in which they will say, ‘Blessed are the barren, wombs that never bore, and breasts which never nursed!’ Then they will begin ‘to say to the mountains, ‘Fall on us!’ and to the hills, ‘Cover us!’’ For if they do these things in the green wood, what will be done in the dry?’ There were also two others, criminals, led with Him to be put to death. And when they had come to the place called Calvary, there they crucified Him, and the criminals, one on the right hand and the other on the left. Then Jesus said, ‘Father, forgive them, for they do not know what they do.’ And they divided His garments and cast lots. And the people stood looking on. But even the rulers with them sneered, saying, ‘He saved others; let Him save Himself if He is the Christ, the chosen of God.’ The soldiers also mocked Him, coming and offering Him sour wine, and saying, ‘If You are the King of the Jews, save Yourself.’ And an inscription also was written over Him in letters of Greek, Latin, and Hebrew: THIS IS THE KING OF THE JEWS.”

For Whom Should We Weep?

What is the most fearful thing in our spiritual life? What is the biggest enemy, the biggest adversary, in our spiritual life? It’s our fleshly thinking. Our fleshly thinking constantly comes up and harasses us. Our fleshly thinking continues to spring up until we are transformed into new flesh. Therefore, it is easy for us to follow our fleshly thinking and we consequently end up becoming an adversary of Jesus even though we know and believe in Jesus. It is because we cannot think of the spiritual things when we fall into fleshly thinking. If that is the case, we end up turning our backs to Jesus because our faith gradually withers away and eventually dies. We become like Judas Iscariot who betrayed Jesus at the end even though he was one of the twelve disciples of Jesus.
The Bible says, “For those who live according to the flesh set their minds on the things of the flesh, but those who live according to the Spirit, the things of the Spirit. For to be carnally minded is death, but to be spiritually minded is life and peace. Because the carnal mind is enmity against God; for it is not subject to the law of God, nor indeed can be. So then, those who are in the flesh cannot please God” (Romans 8:5-8). We must know that fleshly thinking still exist in us and harasses us, but we must be spiritually minded. The most proper thing for you and me to keep is the spiritual thinking and the spiritual faith. We become upright when we are spiritually minded, that is, when we think of the spiritual work first. And I also believe that we can live a successful spiritual life only when we follow God like that.
Easter Sunday returns every year in spring. Usually, Easter Sunday is the first Sunday after the full moon that occurs next after the vernal equinox. The date of Easter Day is calculated as such because it was originally based on the Jewish lunar calendar. This year’s Easter Sunday will be April 15th. Today is April 1st. Christians designate next week, a week before Easter Sunday, as Passion Week, and they fast during that time and think of the passion of Jesus and participate in that suffering through some kind of asceticism or saving food that they have not eaten while fasting and giving it to the poor. Then, they share and eat hard-boiled eggs in the morning of Easter Sunday. They live with new hearts like that. Although such a custom is the religious ritual of the season, many people think of such a season only fleshly and just consider Passion Week as depressing.
In the Word from today’s Scripture passage, a Cyrenian man passed by when Jesus was carrying the Cross up to the Golgotha Hills and the people made him carry the Cross of Jesus and follow Him. Many people at the time pounded their chests and mourned in lamentation as they followed Jesus up to the hill. They were weeping because Jesus was being taken to the place of execution even though He did not deserve to be killed. At that time, our Lord said, “It’s fine that you pity Me. But cry for yourself and your descendants instead of crying for Me.” He said, “Daughters of Jerusalem, do not weep for Me, but weep for yourselves and for your children” (Luke 23:28). At that time, a lot of women in Jerusalem were following after Jesus and trying hard to stop the execution, but the Lord said that they should cry for themselves and for their children, instead of weeping for Him as it is recorded in the Scriptures here.
How was Jesus able to speak like this when He knew that He would die and so many people sympathized with Him and pitied Him? How could He say such things when they pounded their chests and wept because of the sadness out of sympathy and love for the righteous death of Jesus, that is, the death He was suffering for the sins of the world for the people? How could Jesus, instead, say, “Daughters of Jerusalem, do not weep for Me, but weep for yourselves and for your children” to the people like that?

You and I Cannot But Think of Fleshly Things

Jesus wants them to weep for themselves, not for Him. The people who have not received the remission of sins and do not believe in the gospel of the water and the Spirit the Lord has given to them, and the people who do not believe in Jesus and do not throw away their fleshly thinking must weep for themselves now. They have to do so because they will be cast into the eternal fire if they do not follow the Lord with faith like that, if they do not return to the spiritual thinking until the day of the Lord’s return and do not confess the faith in the Lord. Therefore, they must pound their chest and cry for themselves and their descendants now.
Jesus is the true Prophet. He taught everything to us. Jesus taught us how we became sinners and how we receive the cleansing of sin. ‘The Lord said, “I am the way, the truth, and the life. Those who believe in me will never be destroyed, and they will receive the eternal life. No one comes to the Father except through Me.” The Lord taught us everything with the Word. Therefore, we must now believe with our hearts, and follow the Lord with thanksgiving.
We would just end up in death if we only followed our fleshly thinking, saying, “It is enough for me now since I have definitely received salvation.” We must realize that any human being can become like that and always live with faith. We must profess our faith everyday and every moment and follow the Lord. I as well as you must do so. I do not want you to become people who die after leading an erroneous life of faith, and therefore, receive judgment later. I sincerely do not want you to become people who end up in death by following fleshly thinking, people who go against the Lord like that. Really, aren’t there so many people who have gone toward the destruction while leading a spiritual life like that? Honestly speaking, they were the same people just like us, but became like that because they fell into fleshly thinking.
If Jesus becomes your Lord once, then He is your eternal Lord. You must never think, “You have become my Lord once, so I would like to forget about You for a while. Let’s meet later at the time of rapture.” You definitely become the Lord’s adversary if you part from the Lord after following Him for a while. If you follow your own fleshly thinking, do not join together with God’s Church, and do not join together with God’s workers, there is only death that awaits you. There is only destruction. Like Judas, it would have been better for such a person not to be born to this world.
Satan the Devil is plotting many things in your hearts now. You know that, right? But, that doesn’t matter. Think about yourself. When you fall into fleshly thinking anyway, realize how many evil things you are doing and how much evil you are plotting, and repent. Give thanks to the Lord who saved such a person like you and follow after the Lord immediately. You just have to have a desire to follow the Lord with faith continuously and to keep your mind spiritually although you are lacking. You must become such people. It is arrogant to think, “I have done enough in my spiritual life. I know what to do even if you do not tell me constantly. I can do as well as you can.” Such arrogance is the way of destruction that leads to death.
You and I must meet the Lord after living with faith and professing our faith constantly. We must become the support for saving the people’s souls. Have you seen an old tree? The outer part of the tree is alive even though the inside is all rotten. New buds and leaves sprout out from there. When we go near a pine tree, we can see many little pine trees growing there from the seeds that fell from the pine tree. A long time ago, I bought a little ginkgo tree and planted it, and the ginkgo tree reaped fruits after three or four years and so many other ginkgo trees started sprouting forth from that root. So many new trees sprout forth when we just plant one tree properly and take proper care of the area around that tree. We can gain as many as twenty trees from one tree.
Then, how many spiritual trees can we attain from each of us? How many people can we save? Would we each just save a few hundred people? Would we each save just a few tens of thousands of people? We each can save hundreds of millions of people. Each one of us will save hundreds of millions of people. I am saying that each one of us would save that many people if that one person followed the Lord to the end with faith like that.
Are you thinking, “Who would receive salvation through me when I am like this?” That’s not true. The Lord works through you and saves many people when you follow the Lord with faith. That is the amazing work of the Lord. The Lord does this, not you and me. I give thanks before the presence of our God who uses us preciously like this.
Allgemeine Nutzungsbedingungen Datenschutz-Richtlinie Cookie Declaration Kontaktieren Sie Uns