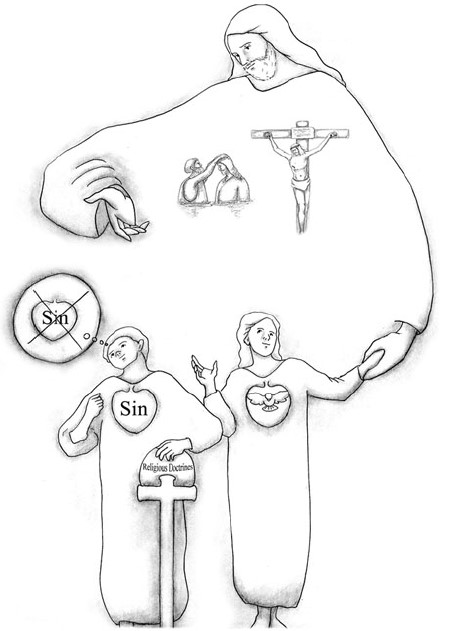 (Luke 23:26-49)
“Now as they led Him away, they laid hold of a certain man, Simon a Cyrenean, who was coming from the country, and on him they laid the cross that he might bear it after Jesus. And a great multitude of the people followed Him, and women who also mourned and lamented Him. But Jesus, turning to them, said, ‘Daughters of Jerusalem, do not weep for Me, but weep for yourselves and for your children. For indeed the days are coming in which they will say, ‘Blessed are the barren, wombs that never bore, and breasts which never nursed!’ Then they will begin ‘to say to the mountains, ‘Fall on us!’ and to the hills, ‘Cover us!’’ For if they do these things in the green wood, what will be done in the dry?’ There were also two others, criminals, led with Him to be put to death. And when they had come to the place called Calvary, there they crucified Him, and the criminals, one on the right hand and the other on the left. Then Jesus said, ‘Father, forgive them, for they do not know what they do.’ And they divided His garments and cast lots. And the people stood looking on. But even the rulers with them sneered, saying, ‘He saved others; let Him save Himself if He is the Christ, the chosen of God.’ The soldiers also mocked Him, coming and offering Him sour wine, and saying, ‘If You are the King of the Jews, save Yourself.’ And an inscription also was written over Him in letters of Greek, Latin, and Hebrew: Then one of the criminals who were hanged blasphemed Him, saying, ‘If You are the Christ, save Yourself and us.’ But the other, answering, rebuked him, saying, ‘Do you not even fear God, seeing you are under the same condemnation? And we indeed justly, for we receive the due reward of our deeds; but this Man has done nothing wrong.’ Then he said to Jesus, ‘Lord, remember me when You come into Your kingdom.’ And Jesus said to him, ‘Assuredly, I say to you, today you will be with Me in Paradise.’ Now it was about the sixth hour, and there was darkness over all the earth until the ninth hour. Then the sun was darkened, and the veil of the temple was torn in two. And when Jesus had cried out with a loud voice, He said, ‘Father, ‘into Your hands I commit My spirit.’’ Having said this, He breathed His last. So when the centurion saw what had happened, he glorified God, saying, ‘Certainly this was a righteous Man!’ And the whole crowd who came together to that sight, seeing what had been done, beat their breasts and returned. But all His acquaintances, and the women who followed Him from Galilee, stood at a distance, watching these things.”

What Does the Lord Say You Gain When You Endure to the End?

People commonly refer to Jesus as the King of Righteousness, the King of kings. Today, I want to share words with you, the words about the topic, “Our Lord as the King of Righteousness.”
When we look at today’s Scripture passage, we can witness the scene of Jesus carrying the Cross up the Golgotha Hills to receive the penalty of the Cross. There was a large multitude of crowd weeping and lamenting that followed Jesus when Jesus carried the Cross up the Golgotha Hills like that. They wept and pounded their chests in lamentation. We also can see all kinds of scenes including the scene that a Cyrenean man from the country came to Jerusalem at the time and he even carried for Jesus the wooden Cross that Jesus was carrying and followed Jesus.
As Jesus carried the wooden Cross up to Golgotha, especially many women followed Him and wept in lamentation. However, Jesus turned to them and said, “Daughters of Jerusalem, do not weep for Me, but weep for yourselves and for your children.” Our Lord said, “For indeed the days are coming in which they will say, ‘Blessed are the barren, wombs that never bore, and breasts which never nursed!’” He was saying that when the last day comes, there will be blessing for the women who could not conceive a child, that is, for the people who could not bear a child and could not breastfeed their child. What does this mean? Jesus said this because He knew what terrible tribulations the people would face in the last day.
That is correct. Even while carrying the Cross up to Golgotha, our Lord worried about us and told us what will happen during the last days. He spoke about what terrible suffering the people will face at the time when the tribulations of the seven horns and of the seven bowls fall in the world at the end. What sort of things will happen during the last days? The universe will be shaken, the heavens, the heavenly bodies of stars, will be shaken and all the people will be destroyed. At that time, our Lord will come to this world again and judge the people who have not been born again. Therefore, the Lord spoke this Word to us to make us think about and prepare for that time. He was saying, “You must not pity Me just because I am carrying the wooden Cross up to Golgotha like this. You lament and weep for Me as you think ‘What a pity for such a young person’ or ‘What did our Lord do wrong that He must suffer such terrible thing.’ However, you must not weep for Me. Instead, you must weep for yourself and your children in the future.”
What is the reason the Lord said this? The Lord said, “If you do not receive salvation in the coming days, you will face greater suffering than carrying the Cross up to Golgotha and being nailed to the Cross that I am suffering. You will receive an eternal suffering that is millions of times more terrible than the suffering I receive on the Cross, the death I receive, the disrespect that I receive, and the tribulation I receive now. Lord spoke to you and me about the end times because of such a reason. Jesus who is being crucified on the Cross in order to save us admonished us the humankind even until His last breath.
The Lord had never committed sin deserving of death on the Cross. He had no sin and no fault. The Israelites at that time said, “Jesus is the King of Jews. Jesus is the King of Israel. He is the King” and hailed Jesus as the King. The religious leaders of Israel considered Him dangerous as the people hailed Jesus as the King, and, therefore, they hated Jesus. Jesus was receiving the penalty of the Cross like this because so-called religious leaders and political leaders such as the Pharisees, the chief priests, and the Scribes hated Jesus. That’s correct. Although Jesus did not have any sin, He carried the Cross up to Golgotha due to the hatred, wariness, and false incrimination ironically by the fervent religious leaders. However, although they made false accusation against Jesus, is Jesus the One who cannot even prove His innocence? That’s not true. However, the Lord received the penalty exactly in accordance with the false accusation and was nailed to death on the Cross.

Our Lord Did Not Have Any Sin

This World Seems to Be Caught in a Threat of Wars

The Gospel Is Spreading Throughout the Entire World through the Internet Ministry and the Literature Ministry We Are Doing.

If 100 people throughout the world received and read the electronic books every day, then it would amount to 3,000 people who receive and read our books each month. And it would add up to 36,000 people in a year. If each of those people received the gospel of the water and the Spirit properly, then they have already received salvation. If each of the born-again delivers the gospel to the other person per each month, then, it would amount to about 100 million people next year. Then, the gospel would be preached to about 2 billion people in two years. This is the era when the gospel is spread so rapidly like this.
The gospel is being preached even now through our devotion. However, in proportion to the spreading of the gospel, our life becomes even more tired. As the Lord’s saying “All who desire to live godly in Christ Jesus will suffer persecution,” not so many people want to receive this righteousness and do the righteous deed together with us even though we truly want to share the righteousness of the Lord with them. Some people say that they have received the remission of sins after believing in the gospel of the water and the Spirit, and they say they want to do the work of the gospel with us. But they ask for money for their service in no time. I don’t know whether they like money better than Jesus, but there were many people who just asked for money without any interest in preaching the gospel.
Although we are lacking, we want to serve the Lord and preach this gospel. That is our purpose. However, the hearts of other people are much different from ours. At times, therefore, our love toward the people of the world cools off. It means that our love for the people will grow cold as the Lord said, “And because lawlessness will abound, the love of many will grow cold” (Matthew 24:12). Our benevolent heart diminishes a lot when we look at people who do lawless acts and just try to fill their pockets under the pretext of God’s righteousness, when we look at people who are just interested in the material things instead of doing the righteous work. Our hearts that look at such things die constantly.

We Are the People of the Lord, the King of Righteousness