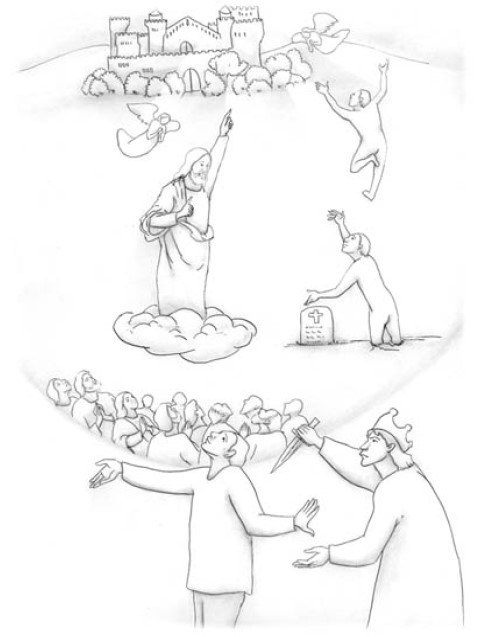 (Luke 24:13-53)
“Now behold, two of them were traveling that same day to a village called Emmaus, which was seven miles from Jerusalem. And they talked together of all these things which had happened. So it was, while they conversed and reasoned, that Jesus Himself drew near and went with them. But their eyes were restrained, so that they did not know Him. And He said to them, ‘What kind of conversation is this that you have with one another as you walk and are sad?’ Then the one whose name was Cleopas answered and said to Him, ‘Are You the only stranger in Jerusalem, and have You not known the things which happened there in these days?’ And He said to them, ‘What things?’ So they said to Him, ‘The things concerning Jesus of Nazareth, who was a Prophet mighty in deed and word before God and all the people, and how the chief priests and our rulers delivered Him to be condemned to death, and crucified Him. But we were hoping that it was He who was going to redeem Israel. Indeed, besides all this, today is the third day since these things happened. Yes, and certain women of our company, who arrived at the tomb early, astonished us. When they did not find His body, they came saying that they had also seen a vision of angels who said He was alive. And certain of those who were with us went to the tomb and found it just as the women had said; but Him they did not see.’ Then He said to them, ‘O foolish ones, and slow of heart to believe in all that the prophets have spoken! Ought not the Christ to have suffered these things and to enter into His glory?’ And beginning at Moses and all the Prophets, He expounded to them in all the Scriptures the things concerning Himself. Then they drew near to the village where they were going, and He indicated that He would have gone farther. But they constrained Him, saying, ‘Abide with us, for it is toward evening, and the day is far spent.’ And He went in to stay with them. Now it came to pass, as He sat at the table with them, that He took bread, blessed and broke it, and gave it to them. Then their eyes were opened and they knew Him; and He vanished from their sight. And they said to one another, ‘Did not our heart burn within us while He talked with us on the road, and while He opened the Scriptures to us?’ So they rose up that very hour and returned to Jerusalem, and found the eleven and those who were with them gathered together, saying, ‘The Lord is risen indeed, and has appeared to Simon!’ And they told about the things that had happened on the road, and how He was known to them in the breaking of bread. Now as they said these things, Jesus Himself stood in the midst of them, and said to them, ‘Peace to you.’ But they were terrified and frightened, and supposed they had seen a spirit. And He said to them, ‘Why are you troubled? And why do doubts arise in your hearts? Behold My hands and My feet, that it is I Myself. Handle Me and see, for a spirit does not have flesh and bones as you see I have.’ When He had said this, He showed them His hands and His feet. But while they still did not believe for joy, and marveled, He said to them, ‘Have you any food here?’ So they gave Him a piece of a broiled fish and some honeycomb. And He took it and ate in their presence. Then He said to them, ‘These are the words which I spoke to you while I was still with you, that all things must be fulfilled which were written in the Law of Moses and the Prophets and the Psalms concerning Me.’ And He opened their understanding, that they might comprehend the Scriptures. Then He said to them, ‘Thus it is written, and thus it was necessary for the Christ to suffer and to rise from the dead the third day, and that repentance and remission of sins should be preached in His name to all nations, beginning at Jerusalem. And you are witnesses of these things. Behold, I send the Promise of My Father upon you; but tarry in the city of Jerusalem until you are endued with power from on high.’ And He led them out as far as Bethany, and He lifted up His hands and blessed them. Now it came to pass, while He blessed them, that He was parted from them and carried up into heaven. And they worshiped Him, and returned to Jerusalem with great joy, and were continually in the temple praising and blessing God. Amen.”

What Did the Disciples of Jesus say?

Jesus Told the Two Disciples Who Were Going Down to Emmaus

It’s a good thing that we have received the remission of sins. We have become the children of God and we will go to the Kingdom of God in the future. However, we must do the work of God while we live in this world. God’s work is righteous and upright, but it is that difficult and challenging. However, we have hope. As our souls have received salvation, our flesh also desires to die once and be brought back to life again and spread the wings of our dreams and live a new life. Jesus was resurrected from the dead and started a new life. Jesus entered the eternal world and now lives gloriously as the King, enjoying riches and splendor.
Therefore, what did the Lord say while He was dying on the Cross? A robber to His side said to the Lord, “Lord, remember me when You come into Your kingdom.” And Jesus said to him, “Assuredly, I say to you, today you will be with Me in Paradise.” As you well know, ‘Utopia’ is one of the synonyms of ‘paradise.’ The word ‘Utopia’ comes from Greek words ou (not, no) and topos (place). So, it means literarily ‘a place that is nowhere on earth,’ or ‘an imaginary place considered to be perfect or ideal.’ Then, what is the meaning of the Lord’s Word that said, “Assuredly, I say to you, today you will be with Me in Paradise.” It is saying that, as the Lord finished 33 years of life in this world and lives a new life in the eternal world, you and I who believe in the gospel of the water and the Spirit also have new life to enjoy. If we desire to enjoy new life, we must believe and give thanks for the fact that Jesus was resurrected.
Did Jesus really resurrect from death? Jesus was resurrected from death so that our body that is corruptible will put on the incorruptible and live eternally with a new life (1 Corinthians 15:53). I have told you earlier that hope means desiring after something. Then, what do you and I desire? Human beings definitely die once after being born again in this world. If our body will be resurrected like the Lord after dying, what would we desire before the presence of God at that time? What would we desire if our imperfect body died once and then received a new life after being brought back to life again? We desire to really live a life like that of the Lord at that time. The Lord said that He would make us participate in His resurrection. Therefore, our bodies will be resurrected after dying once, and the thing we desire at that time before the presence of God is that we want to have a new body, unlike the imperfect body we have now, and go wherever we want to go like Jesus, rule over the angels, enjoy everything, and not become subject to evil. That’s what I desire.
My heart becomes refreshed as I face this Easter Sunday because I have received the salvation of my soul, received the remission of sins in my heart, and all things have been guaranteed by the Lord, and because the happiness of my future has been guaranteed before the presence of the Lord. Therefore, I want my flesh to receive a new life also and live a life like that of the Lord’s. I want to live again with a perfect body, not an imperfect body that we have now. Therefore, Easter Sunday has deep meaning for you and me.

Do You Believe That Jesus Was Resurrected from Death?