Subject 24 : Sermons for Those Who Have Become Our COWORKERS 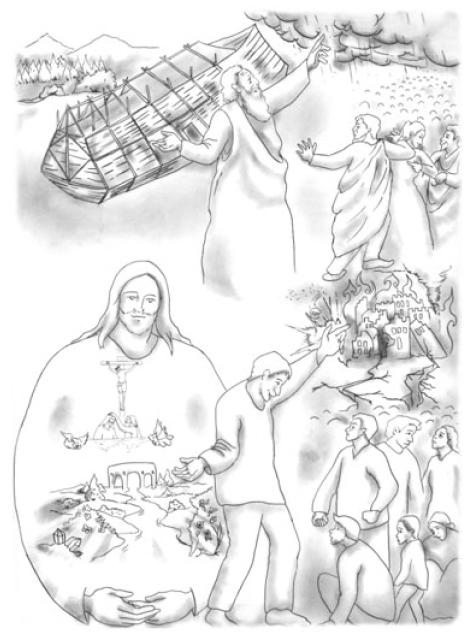 (Hebrews 11:7)
“By faith Noah, being divinely warned of things not yet seen, moved with godly fear, prepared an ark for the saving of his household, by which he condemned the world and became heir of the righteousness which is according to faith.”
When we read the Bible with eyes of faith, we can see so many forefathers of faith listed in it. And I would like to introduce one of them, namely, Noah.

What Kind of Faith Had Noah Lived out until He Went to God?

God Did the Righteous Work through Noah

We work by faith. We preach the gospel all around the world by faith. Do not ever think in terms of the flesh. To be carnally minded is death. It is not worth it. This is nothing. We should think everything through wisely and spiritually. At the same time we need to be sincere and pure.
As the holiday season is approaching, your family may complain about you not calling or giving them any allowance. Then you need to say kindly to them, “I am so sorry. But, in this destitute world, I am just also surviving.” If they keep harassing you even after you said these things in such a polite way, you should then diligently help them with their house chores. Do the dishes and mop the floors. No matter how mad you get, do not say, “How rude! You are only mere sinners!” Even if they are, you should bow your head to your elders. You need not be loathed by them for acting so arrogantly. Once they start hating you, they will no longer listen to your words. That is why you need to say kind words to them, such as, “I am sorry. I am somewhat dumb and the world is too tough for me to live through.” I believe you will do well in such situations.
I am worried about our married sisters in our Church. Brothers tend to have no problems with their family members. Women often lose their tempers all of sudden. Dear sisters, please do not get back at your estranged family members. You will be in bigger trouble when you lose your credit. Do you remember a Korean saying that goes, “A well-said word can pay off thousands of dollars in debt.” Dear fellow saints, you can at least be gentle with your words.
How do you see me? I do spiritual things clearly by faith but at the same time I try to be humane in earthly affairs. However, I cannot stand it when someone says anything bad about the gospel of the water and the Spirit, then I put that relationship with that offender to an end. I cannot forgive such a person. Nevertheless, I do my basic duties as a human being. We, the born-again Christians, are the most blessed people in this world. So we should be tolerant and wise with sinners.
I wondered why people hustle and bustle about, but I found out this holiday season which starts this Friday is very long. We will take a long break from Friday through to next Wednesday. How much money do you think they will spend in amusing themselves for 6 days? “Have fun, fun, fun while you can, before you are too old to have fun ♪” Have you ever heard this song? I am not sure who wrote this song, but obviously he didn’t think about money being spent to have fun. You should work hard while you are young and able; you should not have fun without any plans. But I do agree that we can’t have fun when we get too old.
When I hear people say that I am old, I get stressed. I worked hard when I was young, and I will continue to work hard even when I get old. I will still work on my bed. Come and check for yourself. If anyone comes to talk to me while I am on my bed all day, I will share fellowship with that person in Christ. No matter how other people convince me not to do anything further, I will do the work of the Lord until my very last moment. In the meantime, our Lord will come without delay, for He never procrastinates.
شرطاں تے ضابطے رازداری دی پالیسی Cookie Declaration ساڈے نال رابطہ