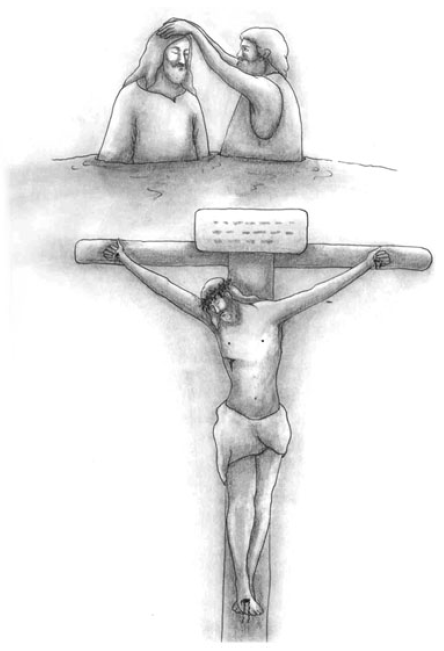 (Leviticus 4:13-21)
“Now if the whole congregation of Israel sins unintentionally, and the thing is hidden from the eyes of the assembly, and they have done something against any of the commandments of the Lord in anything which should not be done, and are guilty; when the sin which they have committed becomes known, then the assembly shall offer a young bull for the sin, and bring it before the tabernacle of meeting. And the elders of the congregation shall lay their hands on the head of the bull before the Lord. Then the bull shall be killed before the Lord. The anointed priest shall bring some of the bull’s blood to the tabernacle of meeting. Then the priest shall dip his finger in the blood and sprinkle it seven times before the Lord, in front of the veil. And he shall put some of the blood on the horns of the altar which is before the Lord, which is in the tabernacle of meeting; and he shall pour the remaining blood at the base of the altar of burnt offering, which is at the door of the tabernacle of meeting. He shall take all the fat from it and burn it on the altar. And he shall do with the bull as he did with the bull as a sin offering; thus he shall do with it. So the priest shall make atonement for them, and it shall be forgiven them. Then he shall carry the bull outside the camp, and burn it as he burned the first bull. It is a sin offering for the assembly.”
Warm greetings to all of you. Today, I would like to share the Word with you on how the people of the Old Testament received the remission of sins from God by offering a certain kind of sacrifice. When we read the Book of Leviticus, we can experience it being very difficult to understand. The Book of Leviticus records in great detail how people in the age of the Old Testament received the remission of sins. If the people of the Old Testament received the remission of sins according to the Word on the sacrificial system, then I believe that all of us living in this age are likewise can receive the remission of sins by believing in the Word of the gospel of the water and the Spirit.
In today’s Scripture reading drawn from Leviticus 4:13-21, it’s written how the people of Israel received the remission of their sins when they sinned against God as a whole. When the people of Israel sinned against God collectively, and when they realized this sin later on, they had to sacrifice a bull as their sin offering. To be remitted from their sins, the people of Israel selected a man amongst themselves to be appointed as the leader of the congregation. And this leader passed the sins of the people of Israel by laying his hands on the head of the sacrificial animal. In other words, a representative of the people of Israel passed their sins on their behalf to an unblemished bull chosen as their sacrificial offering.
What We Must Know about the Sacrificial System
It’s very important for us to be knowledgeable of the Word of God. To once again summarize the sacrificial system of the Old Testament in rudimentary terms, acting as the representative of the whole congregation of Israel, the High priest passed their sins to a live goat by laying his hands on its head; he then drew the blood of the goat by cutting its throat; taking some of this blood into the Most Holy Place, he then sprinkled it seven times on the mercy seat; and then the High priest put some of the blood on the Altar of Incense. In addition, the High priest also poured the rest of the blood out under the Altar of Burnt Offering. After this, the flesh of the bull was cut into pieces, and they were burnt on the Altar of Burnt Offering and offered to God. This is how the people of Israel received the remission of sins when they sinned. Today, I would like to expound on this sacrificial system through which the people of Israel were remitted from their sins by passing their sins onto the sacrificial offering through the laying on of hands.
It is from the Scripture that we can find out how the remission of sins is received. For a sinner to receive the remission of sins, he must first of all pass his sins to a sacrificial offering by laying his hands on its head without fail. The offering that enables one to pass and transfer all his sins to his sacrificial animal is called the “sin offering.” Let me first explain here what this sin offering means.
A “sin offering” is an offering that is made to make atonement for one’s sins. When one seeks to receive the remission of sins from God, he himself must pay a price for it, and this price is paid by offering a sacrificial animal in lieu of himself. In other words, the “sin offering” here means that something else is sacrificed to make atonement for one’s sins, by killing such animals as a lamb, a goat, or a bull.” That’s why it’s known as the “sin offering.” To illustrate, instead of a sinner dying for his own sins, these sins are passed on to a bull, and the bull instead pays for them by being killed in the sinner’s place to pay the wages of his sins. It’s very important for you to fully grasp this point, as only then can you believe in the Word as I go on to explain it to you.

Various Offerings Were Meant to Fulfill the Law

Apart from such sin offerings, there also are various other offerings such as burnt offerings and peace offerings. There is a common attribute to all these different offerings, and it is that they all require one’s sins to be passed to a sacrificial animal. That’s because instead of a sinner dying, a commensurate offering has to be made to God without fail. Put differently, instead of putting the sinner to death, an animal is killed. This was God’s justice and His fair salvation. You all know that there are 613 commandments in the Law of God, right? You also know that you are incapable of keeping all these commandments? But you still try to keep them, don’t you? It is indeed absolutely mandatory for us to keep these God-given laws.
If we cannot keep this Law, then we must be put to death as the price for failing to do so. Therefore, the conclusion to draw here is simple and straight-forward: if we fail to keep the Law of God, we have no choice but to face death. However, although God has to kill us sinners who cannot keep His Law, but because He loved us so much, He could not bring Himself to put us to death; and for this reason, God fulfilled the salvation of atonement, of the water and the Spirit, by accepting a live sacrificial offering in our place. God is just and absolute. He is perfect. His Word is therefore the absolute Truth that is fulfilled without fail.
Through Moses, God made a promise to the people of Israel with blood. And the people of Israel pledged that they would keep the God-given Law. God told Moses to call the children of Israel out before him. And proclaiming His Law to the people of Israel, God made the congregation of Israel to kill a bull and sprinkle this blood together, saying to them, “I have given you My Law, and you have promised to keep this Law. If you fail to keep the Law, then you will be put to death, just as this bull’s blood was shed and it was killed.” At the same time, however, God knew beforehand that the people of Israel were incapable of keeping the Law, and even so God still loved them. Therefore, instead of putting the people of Israel to death, God made them prepare sacrificial offerings in their place. This is God’s just law of salvation. The key point for you to grasp here is that absolutely no sin whatsoever can ever be remitted away without paying its full price.
Sin is absolutely intolerable to God. The wages of sin is death without fail. This means that sin is blotted out only if its wages are paid off through death; it is not something that can be forgiven without a price. Because we commonly think of God as the God of love, it’s very easy for us to delude ourselves into thinking that when we sin against God, out of His goodness He would just forgive us without demanding anything in return. But in reality, God never forgives any sinner freely, and instead He demands a price for it without fail, for He is perfect, holy, and just. Put different, because God does not lie, because God is holy, and because God is sinless and cannot tolerate any sin, He must put all sinners to death.
However, behind such wrath God shown towards sin, there is His just love, His love of salvation. As we can see from Scripture, this love of salvation has been manifested to us through the sacrifice made by Jesus Christ, that is, that which has been revealed to us by God the Father by passing all the sins of every human being to Jesus Christ through His baptism, which is a form of the laying on of hands; putting Him to death; and washing away our sins through this death of atonement. Let me explain this by drawing an example from everyday life.
Let’s say that you were pressed for money and bought some food from a store on a tab. Can you settle your tab just by saying to the store owner that you’ve paid it all off already, without actually paying the money you owe him? No, of course not! You cannot settle your debt just with your words, nor is this acceptable to your creditor. All debts must be paid off in reality to be settled. If you have no ability to pay them off, then someone else must make that payment on your behalf. This is only fair and just. God has such a just mind. And man also has such a sense of justice. Because we human beings were made in the likeness of the image of God and after His heart, we are also drawn to justice.
As shown in today’s Scripture reading, the people of the Old Testament received from God such a system to get their sins remitted away. When the High priest passed all the sins of the people of Israel to the sacrificial animal as their representative, killed it, drew its blood, and burnt its flesh as an offering to God, God accepted this offering and remitted the sins of the people of Israel.

The Death Jesus Suffered on the Cross

Receive the Remission of Sins through Your Faith