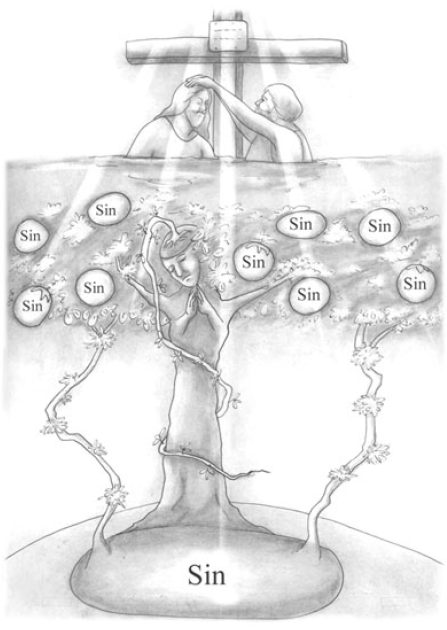 Our God Calls Sinners Those Who Repeatedly Commit Sin Like This

God doesn’t call us human beings sinners without any reason. Far from it, God wants to examine and diagnose us correctly. Why are we then called sinners before God? It’s because we were all born as sinners. It is not as though we commit sin just once in our lifetime. Just like leprosy spreading all over the skin, sin continues to spread around in our everyday lives. When one is young, he/she commits minor sins. But the older one gets, the more he/she accumulates repeated sins, and the weight of these sins keeps on growing. Eventually, one turns into a pile of sins, doing nothing but committing sin for the rest of his/her life. Our Lord had such people in His mind when He spoke of those who still have not been saved.
Referring to everyone, the Book of Romans says, “Through one man sin entered the world, and death through sin, and thus death spread to all men” (Romans 5:12). This means that we had become sinners from the moment we were born precisely because we had inherited the sinful nature from our forefathers. The Bible therefore says that we cannot help but commit sin throughout our lifetime. When the Bible speaks of sinners, it is speaking about none other than you and me, we who were born with such sinful natures that make it impossible for us not to commit sin.
As such, no one can help but commit sin. Let me explain this by drawing an analogy to an apple tree. Can an apple tree bear pears or persimmons? Can the apple tree avoid bearing apples, just because it doesn’t want to bear them? No, of course not! An apple tree cannot help but bear apples for this is its very nature. It’s bound to blossom when the spring comes, and it’s bound to bear apples in the fall.
Like this, just as an apple tree bears apples, so are human beings born with their parents’ sinful nature inherited in them, and therefore they cannot help but commit all kinds of sins. As such, every type of sin, whether it is committed in one’s heart or outwardly with one’s act, is still a sin. Once born, human beings are destined to continue to commit sin until their very last breath. We were conceived as sinners in our mothers’ wombs, and we were born in sin. David realized this and confessed in Psalm 51:5, “In sin my mother conceived me.” David is saying here that when his mother conceived him, he was conceived and born in sin and iniquity. From whom, then, did our parents inherit sin? They inherited it from their own parents and so on. In short, all of us were born into this world as a brood of sin.

We Are Sinners Because We Inherited Every Sin from Our Forefathers

The root of our sins is traced back to our grandparents and beyond, all the way to Adam and Eve. In other words, we are sinners because Adam and Eve, the ancestors of our human race, committed sin, and we have inherited this sinful nature as their descendants. Our forefathers sinned against God because they fell into the Devil’s temptation. Sin entered them because they did not believe in the Word of God. After their fall, they bore many children, and these children inherited their sins and they passed them all the way down to us. Since the children have inherited the sins of their father and mother, isn’t it only natural for them to act in the same way as their parents? Indeed, they end up committing the same sins. Even when the children are not taught about the sins committed by their parents of the flesh, they still commit the same sins. This is why there is a saying, “Like father, like son.”
As such, because we humans have inherited the sins of our forefathers, it is impossible for us not to commit sin in our lives even if we want to. In the days of the Old Testament, when one had a swelling or a bright spot on his skin, he had to be examined by a priest and isolated for seven days. If he was okay when reexamined after seven days, he was declared clean, but if the sore had spread over the skin, he was declared unclean, that is, a sinner. This implies that we don’t just commit sin once or twice, but we sin continuously time after time. That is why all human beings are called sinners.

The Word of God Is Very Different from Man’s Thoughts

How Many Sins Are in the Heart of a Man?