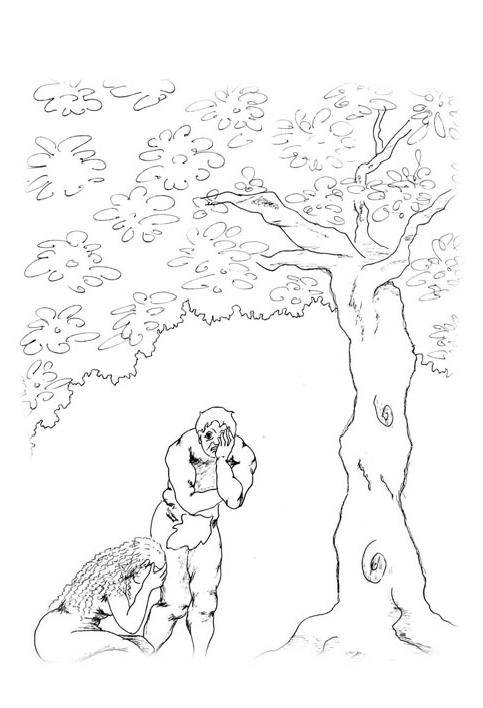 (Mark 7:8-9)
For laying aside the commandment of God, you hold the tradition of men—the washing of pitchers and cups, and many other such things you do.’ And He said to them, ‘All too well you reject the commandment of God, that you may keep your tradition.
(Mark 7:20-23)
“And He said, ‘What comes out of a man, that defiles a man. For from within, out of the heart of men, proceed evil thoughts, adulteries, fornications, murders, thefts, covetousness, wickedness, deceit, licentiousness, an evil eye, blasphemy, pride, foolishness. All these evil things come from within and defile a man.

The Reason Why God Gave Us the Law

We Should Know Exactly What Our Sins Are

Since we are all descendants of Adam, we all have lusts in our hearts. However, what does God tell us? He tells us not to commit adultery even though we have adultery in our hearts. We have murder in our hearts, but what does God tell us? He tells us not to kill. We all defy our parents in our hearts, but He tells us to honor them. We should realize that His Word is right and good, but we all have sin in our hearts.
Is this correct or not? It is absolutely correct. Therefore, what must we do before God? We have to admit that we all are masses of sin and hopeless sinners. It is not right to think that we were righteous yesterday because we did not sin yesterday, but are sinners today because we have committed sins today. We are born as sinners. Whatever we do, we will still be sinners. This is why we should be redeemed through faith in the baptism of Jesus.
We are not sinners because of our deeds: such as committing adultery, murder, theft...but we are sinners because we were born as sinners. We were born with twelve kinds of sins and since we are born as sinners in the eyes of God, we can never become good by our own efforts. We can only pretend to be good.
We are born with sinful minds, so how can we be righteous even if we don’t actually commit these sins? We can never be righteous before God by ourselves. If we claim to be righteous, it is hypocrisy. Jesus called the Pharisees and the scribes ‘the hypocritical Pharisees and scribes’ (Matthew 23:23). Humans are born as sinners and they sin before God throughout all their lives.
Anyone claiming that he/she has neither fought nor hit anyone or stolen even a needle from anyone in all his/her life is lying because humans are born as sinners. That person is a liar, a sinner and a hypocrite. This is how God sees him/her.
Everyone is a sinner from his/her birth. Even if you don’t commit a single sinful act, you are destined for hell. Even if you have kept most of the Law and commandments, you are still a sinner destined to go to hell.
Then, what should we do with such destinies? We must ask for God’s compassion and depend on Him to be saved from our sins. If He doesn’t save us, then we will go to hell. That is our destiny.
Only those who accept God’s Word admit that they were indeed sinners. They also know that they become righteous by faith. So, they know that ignoring and laying aside His Word without recognizing it is the most serious sin. Those who accept His Word are righteous, even though they were previously sinners. They were born again of His Word in His grace and are the most blessed.
Those Who Try to Be Redeemed through Their Works Are Still Sinners
Who are still sinners even after their believing in Jesus?
Those who try to be redeemed through their works
Let’s read Galatians 3:10 and 11. “For as many as are of the works of the law are under the curse; for it is written: ‘Cursed is everyone who does not continue in all things which are written in the book of the law, to do them.’ But that no one is justified by the law in the sight of God is evident, for ‘The Just shall live by faith.’”
It is said, “…everyone who does not continue in all things which are written in the book of the law is cursed.” Those who think they believe in Jesus, yet try to be justified by their works are cursed. Where are those who try to be justified by their works? They are under the curse of God.
Why did God give us the Law? He gave us the Law so that we may realize our sins (Romans 3:20). He also wanted us to know that we are complete sinners who are destined for hell.
Believe in the baptism of Jesus, the Son of God, and be born again of water and the Spirit. Then, you will be saved from your sins, become righteous, have eternal life and go to heaven. Have faith in your hearts.
The Most Arrogant Sin in the World
What’s the most arrogant sin in the world?
To try to live by the Law
We are blessed by having faith in His blessing. God saves those who have faith in His Word.
But today, among believers, there are many Christians who try to live by His Law. It is commendable that they try to live by the Law, but how is it possible?
We must realize how foolish it is to try to live up to His Law. The more we try, the harder it becomes. He said, “Faith comes by hearing, and hearing by the word of God” (Romans 10:17). We need to cast off our arrogance in order to be saved.

We Have to Give Up Our Own Standards to Be Saved

What do we have to do to be saved?
We must give up our own standards.
How can a person be saved? It is possible only when he/she recognizes himself/herself to be a sinner. There are many who have not yet been redeemed because they cannot give up their wrong beliefs and efforts.
God says that those who clench onto the Law are cursed. Those who believe that they may gradually become righteous by trying to live up to the Law after believing in Jesus are cursed. They believe in God, but they still think that they have to live according to the Law to be saved.
Dear friends, can we become righteous through our works? We become righteous only by believing in the Word of Jesus; and only then are we redeemed. Only by having faith in the baptism of Jesus, His blood, and His Godhead, are we redeemed.
That is why God has prepared the law of faith for us as a way to become righteous. The redemption of the water and the Spirit does not lie in the works of people, but in the faith in the Word of God. God delivered us through faith and that is how God planned and completed our salvation.
Why were those who believed in Jesus not redeemed? Because they did not accept the word of the redemption of the water and the Spirit. But we, who are as imperfect as they were, have been redeemed through our faiths in the Word of God.
If two people were to work on a grindstone, the one left behind would keep on working, even after the other person is taken up. The one who is left behind represents one who has not yet been redeemed. Why was one taken and the other left behind?
The reason is because one listened and believed in the Word of God, but the other worked hard to keep the Law and was eventually cast down into hell. That person was trying to crawl up to God, but God shook him off, as if he/she were a bug crawling up His leg. If a person tries to crawl up to God by trying to keep the Law, he/she will surely be thrown into hell.
That is why we have to be redeemed by faith in the water and the Spirit.
“For as many as are of the works of the law are under the curse; for it is written, ‘Cursed is everyone who does not continue in all things which are written in the book of the law, to do them,’” “But that no one is justified by the law in the sight of God is evident, for ‘The just shall live by faith’” (Galatians 3:10-11, Romans 1:17).
Not believing in the Word of God is a sin before Him. In addition, it is also a sin to lay aside God’s Word according to one’s own standards. We human beings cannot live by His Law because we are all born as sinners and continue to sin all our lives. We sin a little here, a little there, and everywhere we go. We have to realize that we are of the flesh and cannot help but to sin.
A human being is like a big bucket of manure. If we try to carry it around, it will splatter all along the way. We are like that. We keep spilling sin everywhere we go. Can you picture it?
Would you still pretend that you were holy? If you were clearly aware of yourself, you would give up trying in vain to be holy and believe in the water and the blood of Jesus.
Those who are not yet born again need to cast off their stubbornness and admit that they are grave sinners before God. Then, they must return to His Word and discover how He saved them with the water and the Spirit.
Terms and Conditions Privacy Policy Cookie Declaration Contact Us