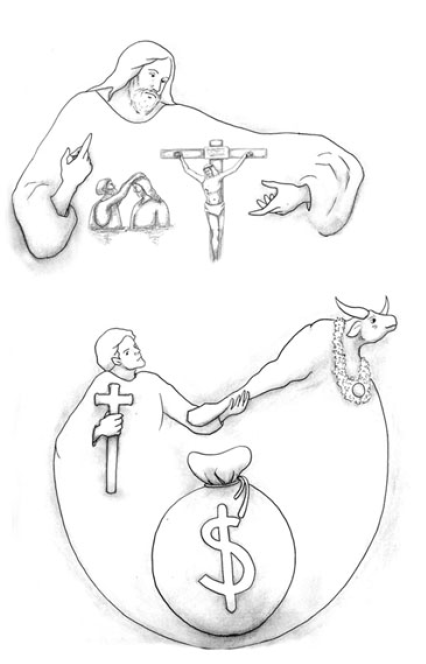 (1 Kings 11:1-13)
“But King Solomon loved many foreign women, as well as the daughter of Pharaoh: women of the Moabites, Ammonites, Edomites, Sidonians, and Hittites—from the nations of whom the LORD had said to the children of Israel, ‘You shall not intermarry with them, nor they with you. Surely they will turn away your hearts after their gods.’ Solomon clung to these in love. And he had seven hundred wives, princesses, and three hundred concubines; and his wives turned away his heart. For it was so, when Solomon was old, that his wives turned his heart after other gods; and his heart was not loyal to the LORD his God, as was the heart of his father David. For Solomon went after Ashtoreth the goddess of the Sidonians, and after Milcom the abomination of the Ammonites. Solomon did evil in the sight of the LORD, and did not fully follow the LORD, as did his father David. Then Solomon built a high place for Chemosh the abomination of Moab, on the hill that is east of Jerusalem, and for Molech the abomination of the people of Ammon. And he did likewise for all his foreign wives, who burned incense and sacrificed to their gods. So the LORD became angry with Solomon, because his heart had turned from the LORD God of Israel, who had appeared to him twice, and had commanded him concerning this thing, that he should not go after other gods; but he did not keep what the LORD had commanded. Therefore the LORD said to Solomon, ‘Because you have done this, and have not kept My covenant and My statutes, which I have commanded you, I will surely tear the kingdom away from you and give it to your servant. Nevertheless I will not do it in your days, for the sake of your father David; I will tear it out of the hand of your son. However I will not tear away the whole kingdom; I will give one tribe to your son for the sake of My servant David, and for the sake of Jerusalem which I have chosen.’”


Today, I would like to address the following question as our main topic: How has collective heresy emerged in the Church of the New Testament?
When we turn to the Old Testament, we see that the people of Israel were able to meet with God through their forefathers of faith. In other words, the Israelites were able to encounter God through His Law that was given through Moses, and through His prophets. And according to the sacrificial system, they could be remitted from their sins through the sacrifices offered in the Tabernacle. Therefore, the love of God and His salvation of the remission of sin, which were manifested through the Tabernacle and its sacrificial system, were very important to them, constituting the indispensable Truth that they infallibly had to believe in and obey in order to attain life and salvation. As such, for the people of Israel, the sacrificial system, manifested in the Tabernacle system and instituted for their just salvation, was as precious as life itself.
Having inheriting Abraham’s faith, the people of Israel had kept their faith in God as their Savior until the days of King David. However, from the days of David’s son Solomon, they came to serve idols against God’s wish, and as a result, they drifted far away from the God of Truth and justice. At that time, on account of King Solomon’s sin of idolatry, God tore ten tribes from the twelve tribes of Israel and handed them over to Jeroboam. Israel was therefore split into two separate kingdoms. However, Jeroboam, the first king of the northern kingdom, feared that his people would return to the southern kingdom where the Temple was located, and to prevent this, he made two golden calves for the people to worship in place of God, and he also changed the sacrificial system that had been instituted by God. As a result, the northern kingdom of Israel turned into a nation of collective heresy serving idols before God.
That is how both the northern and southern kingdoms ended up turning into nations of collective heresy, and through the work of Satan, this faith of idolatry was passed all the way down to Christians living in the age of the New Testament. In other words, by making even today’s Christians serve idols, Satan has turned them into collective heretics. The people of Israel had fallen into the sin of idolatry, and as this very same sin has prevailed even in today’s Christianity, it has rendered even those who believe in God’s love to be accursed. Like this, the collective heresy begun by Jeroboam continues to prosper and grow in today’s Christianity, but few Christians actually realize this.

Why Did Israel Turn into a Nation of Collective Heresy?

To Save Everyone from Sin and Collective Heresy, God Sent His Son Jesus Christ to This Earth