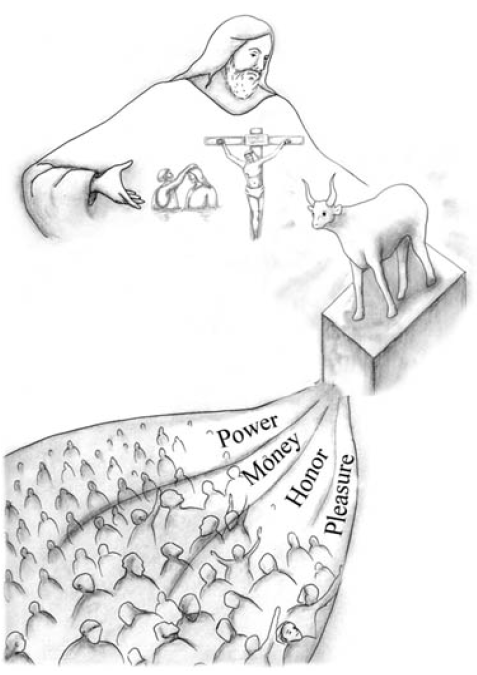 
Today’s Scripture passage that we just read records the events that occurred when Rehoboam, Solomon’s son, assumed the throne. Rehoboam was King Solomon’s son by blood. When King Solomon died, the people of Israel came to Shechem to see his son Rehoboam, and made a request to him. At that time, a man called Jeroboam, the son of Nebat, returned from his exile in Egypt and came to see Rehoboam together with the people of Israel.


“Your Father Made Our Yoke Heavy; Now Therefore, Lighten the Burdensome Service of Your Father”


Why Does Heresy Emerge from within Christianity?

Heresy springs forth in Christian communities because there are people like Rehoboam or Jeroboam in them. Let’s now examine more closely why it is that heresy has emerged from within Christianity. Even for us, who believe in the gospel of the water and the Spirit, if we follow our private greed too much, then we will also turn into heretics. And for those inside Christian communities as well, if they believe in Christianity only as a matter of religion, rather than leading their lives of faith by believing in the gospel of the water and the Spirit, then they will also be seen as heretics in God’s sight. Although it’s only natural for this to happen to nominal Christians, you must realize that even if one follows God, if he only seeks his private desires, then he will also turn into a heretic.
Even for the believers in the gospel of the water and the Spirit, if they live only according to the desires of their flesh, then they may also turn into heretics before God. Jeroboam had followed his private greed. That’s why he turned into a heretic in God’s sight. King Jeroboam was a heretic before God. That’s because he had followed only the lust of the flesh according to his heart’s desires. Heretics spring forth from their heretical predecessors. Jeroboam had witnessed Solomon’s walk while serving in his court. That’s why he committed the same heretical sins as King Solomon. Like this, because the people of Israel also followed in the footsteps of Jeroboam and repeated the same sins that he committed, they turned into heretics hated by God.
There are many in today’s Christian communities who are imprisoned by collective heretics. In today’s Christianity, all those who do not believe in the gospel of the water and the Spirit are in fact God’s opponents, but it’s not because they actually wish to stand against God that this happened. Rather, it’s all because they are unable to cast aside the lust of the flesh that’s in their hearts. If one is not born again, and therefore his heart is not indwelt by the Holy Spirit, then he is incapable of throwing away the lust of his flesh, and that is why he ends up belonging to the gathering of collective heretics. It’s so frustrating when I think about such people who are following their own lust before God. How can a pastor seized by his own carnal lust be called a leader of Christianity? Such pastors do not know the gospel of the water and the Spirit nor believe in it, and therefore they have many sins in their hearts. Then how can these pastors, who are ignorant of the gospel of the water and the Spirit, stand before their congregation and preach to them, far less spread this gospel of Truth to sinners?
It’s said that a lot of worldly perks follow when one becomes a pastor. Kings are guaranteed various royal prerogatives, but it’s said that pastors are guaranteed even more privileges than kings. So they don’t want to give up their line of faith, even when they come to know it is wrong, for they would lose every privilege as pastors of mainstream Christianity. It’s because so many pastors today are ministering according to their private lust only to satisfy this greed that they don’t even try to correct their mistaken direction. That is why pastors and their followers are unable to escape from collective heresies of the so-called mainstream Christianity.
In today’s Christianity also, many leaders are living according to the lust of their flesh, just like Jeroboam. All these people are walking on the way of heresy before God. Heretical pastors are ministering to pursue their individual greed. Some pastors emphasize the so-called “blessings of the three-fold gospel.” These pastors all seek only the blessings of the flesh. Citing 3 John 1:2, which says, “Beloved, I pray that you may prosper in all things and be in health, just as your soul prospers,” they claim that if anyone believes in Jesus, he would not only be saved but also receive the blessings of the earth and be healed from all his physical illnesses. Such beliefs are nothing more than placing one’s faith in crude, false doctrines that are no better than a crass comedy. Armed with the argument that claims, “All problems will be solved if one believes in Jesus,” they incite those who seek their own lust, and turn them into fanatical followers of their own teachings. For such people, Jesus is little more than an insurance provider that guarantees their success. Deep in the center of their hearts, it’s not Jesus that is found, but golden calves.

The Collective Heresy in Christianity, Calling Itself Orthodox Denomination, Has Emerged out of the Ignorance of the Gospel of the Water and the Spirit