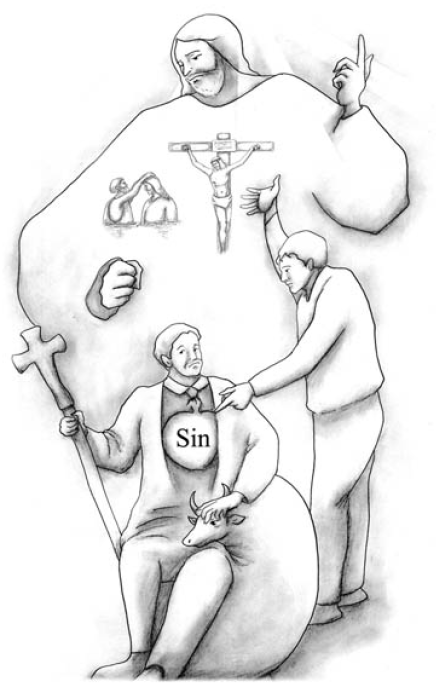 (1 Kings 13:33-34)
“After this event Jeroboam did not turn from his evil way, but again he made priests from every class of people for the high places; whoever wished, he consecrated him, and he became one of the priests of the high places. And this thing was the sin of the house of Jeroboam, so as to exterminate and destroy it from the face of the earth.”


It’s raining softly. Yesterday, while watching TV, I saw Bill Gates saying in an interview that it’s now possible to implant computer chips in the human body. Until now, chips had been implanted in inanimate objects and animals to keep track of them, but now, it’s possible to implant computer chips deep in the human body. This speaks to the fact that the end times described in Revelation chapter 13 are fast approaching. Previously, chips could be implanted in a limited range of bodily parts, such as the thigh or the back of the hand, but as these chips could easily be removed through a simple surgical procedure, they are now implanted deep in the organs of the human body, so that they may not be removed so easily. According to Bill Gates, this is now more than possible. The people of the world, of course, would be quite excited about this new technology. There are certain conveniences that come with this technology; for instance, if someone is kidnapped, you could track him down and locate him by using GPS via satellites. When I heard this news yesterday morning, I was reminded that the age of Revelation is nearing us faster and faster.
We just read some verses from 1 Kings. Recently I have been preaching about heresy, and I am a bit worried that some people may be offended by what I am saying. But now is the time for me to preach about heresy, and I have to continue to do this until our minds can clearly recognize who the real heretics are. I believe that people all over the world must also have the right understanding of heretics for the gospel of the water and the Spirit to be spread even more.
Today’s Scripture passage comes from 1 Kings 13:33-34, and it is written here, “After this event Jeroboam did not turn from his evil way, but again he made priests from every class of people for the high places; whoever wished, he consecrated him, and he became one of the priests of the high places. And this thing was the sin of the house of Jeroboam, so as to exterminate and destroy it from the face of the earth.” It is also written in 1 Kings 12:33, “So he made offerings on the altar which he had made at Bethel on the fifteenth day of the eighth month, in the month which he had devised in his own heart. And he ordained a feast for the children of Israel, and offered sacrifices on the altar and burned incense.”
Both these passages speak about Jeroboam, a man who had committed great sins before God. He had made golden calves to replace God, changed the date of the Day of Atonement arbitrarily on his own, and appointed ordinary people to priesthood instead of Levites. Even worse, he himself performed sacrifices to God.
At that time, a servant of God appeared and rebuked Jeroboam’s deeds, saying to him, “Thus says the LORD: ‘Behold, a child, Josiah by name, shall be born to the house of David; and on you he shall sacrifice the priests of the high places who burn incense on you, and men’s bones shall be burned on you’” (1 Kings 13:2). However, Jeroboam did not turn around from his evil way, but continued to make priests out of ordinary people to serve in the shrines and offer sacrifices. This was a grievous sin before God.
As the Bible mentions, Jeroboam built many shrines throughout Israel. Sacrifices were offered mostly to idols in these shrines. Jeroboam set up golden calves in Dan and Bethel, and made the people of Israel worship them. And he built shrines practically everywhere across the whole northern kingdom of Israel, where the ten tribes of Israel were living. Jeroboam had set up golden calves in Dan and Bethel because he was afraid that the people might return to the southern kingdom of Judah. This alone was a great sin, but he went even further by building a shrine in each village and making his people sacrifice to the idols. Jeroboam’s sins were enough to provoke the wrath of God, and it was because of these sins that his household and his kingdom were destroyed. Jeroboam not only offered sacrifices himself, but he made priests out of ordinary people for them to worship idols at the shrines. He appointed anyone who volunteered as the priests of the shrines. By thus making the people of Israel serve idols, Jeroboam provoked the wrath of God.
As such sins of Jeroboam provoked God’s great wrath, the people of Israel were destroyed by God. It’s because of these sins that Israel lost its sovereignty and its people were massacred by foreigners. This happened all because of the sins that Jeroboam had committed, and because the people of Israel had followed his sins. The destruction of the people of Israel was not because of anyone else’s sins. They were destroyed all because of the sins that Jeroboam had committed against God, and such sins continue to arise endlessly in today’s Christianity also, committed by false prophets. Even in present-day Christianity, such fallacious faith continues to be passed down.


Why Has Today’s Christianity Become So Desolate?

For Those Who Have Not Washed Away Their Sins with the Gospel of the Water and the Spirit, Emphasizing Only the Gift of Healing Is the Shortcut for Them to Turn into Heretics