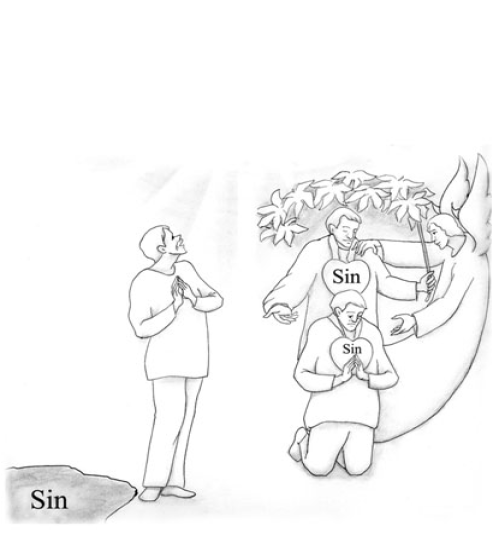 (1 Kings 21:1-26)
“And it came to pass after these things that Naboth the Jezreelite had a vineyard which was in Jezreel, next to the palace of Ahab king of Samaria. So Ahab spoke to Naboth, saying, ‘Give me your vineyard, that I may have it for a vegetable garden, because it is near, next to my house; and for it I will give you a vineyard better than it. Or, if it seems good to you, I will give you its worth in money.’ But Naboth said to Ahab, ‘The LORD forbid that I should give the inheritance of my fathers to you!’ So Ahab went into his house sullen and displeased because of the word which Naboth the Jezreelite had spoken to him; for he had said, ‘I will not give you the inheritance of my fathers.’ And he lay down on his bed, and turned away his face, and would eat no food. But Jezebel his wife came to him, and said to him, ‘Why is your spirit so sullen that you eat no food?’ He said to her, ‘Because I spoke to Naboth the Jezreelite, and said to him, ‘Give me your vineyard for money; or else, if it pleases you, I will give you another vineyard for it.’ And he answered, ‘I will not give you my vineyard.’’ Then Jezebel his wife said to him, ‘You now exercise authority over Israel! Arise, eat food, and let your heart be cheerful; I will give you the vineyard of Naboth the Jezreelite.’ And she wrote letters in Ahab’s name, sealed them with his seal, and sent the letters to the elders and the nobles who were dwelling in the city with Naboth. She wrote in the letters, saying,
Proclaim a fast, and seat Naboth with high honor among the people; and seat two men, scoundrels, before him to bear witness against him, saying, ‘You have blasphemed God and the king.’ Then take him out, and stone him, that he may die.
So the men of his city, the elders and nobles who were inhabitants of his city, did as Jezebel had sent to them, as it was written in the letters which she had sent to them. They proclaimed a fast, and seated Naboth with high honor among the people. And two men, scoundrels, came in and sat before him; and the scoundrels witnessed against him, against Naboth, in the presence of the people, saying, ‘Naboth has blasphemed God and the king!’ Then they took him outside the city and stoned him with stones, so that he died. Then they sent to Jezebel, saying, ‘Naboth has been stoned and is dead.’ And it came to pass, when Jezebel heard that Naboth had been stoned and was dead, that Jezebel said to Ahab, ‘Arise, take possession of the vineyard of Naboth the Jezreelite, which he refused to give you for money; for Naboth is not alive, but dead.’ So it was, when Ahab heard that Naboth was dead, that Ahab got up and went down to take possession of the vineyard of Naboth the Jezreelite. Then the word of the LORD came to Elijah the Tishbite, saying, ‘Arise, go down to meet Ahab king of Israel, who lives in Samaria. There he is, in the vineyard of Naboth, where he has gone down to take possession of it. You shall speak to him, saying, ‘Thus says the LORD: ‘Have you murdered and also taken possession?’’ And you shall speak to him, saying, ‘Thus says the LORD: ‘In the place where dogs licked the blood of Naboth, dogs shall lick your blood, even yours.’” So Ahab said to Elijah, ‘Have you found me, O my enemy?’ And he answered, ‘I have found you, because you have sold yourself to do evil in the sight of the LORD: ‘Behold, I will bring calamity on you. I will take away your posterity, and will cut off from Ahab every male in Israel, both bond and free. I will make your house like the house of Jeroboam the son of Nebat, and like the house of Baasha the son of Ahijah, because of the provocation with which you have provoked Me to anger, and made Israel sin.’ And concerning Jezebel the LORD also spoke, saying, ‘The dogs shall eat Jezebel by the wall of Jezreel.’ The dogs shall eat whoever belongs to Ahab and dies in the city, and the birds of the air shall eat whoever dies in the field.’ But there was no one like Ahab who sold himself to do wickedness in the sight of the LORD, because Jezebel his wife stirred him up. And he behaved very abominably in following idols, according to all that the Amorites had done, whom the LORD had cast out before the children of Israel.”


From today’s Scripture passage, I would like us to reflect on the sins of Ahab and Jezebel. To expropriate Naboth’s vineyard by force, King Ahab had solicited perjury from false witnesses, and based on their false accusation, he had Naboth killed. To hold Ahab accountable for this sin, God then told Elijah His servant to deliver the following message to Ahab: “Have you murdered and also taken possession? In the place where dogs licked the blood of Naboth, dogs shall lick your blood, even yours” (1 Kings 21:19). This came to pass exactly as Jehovah had said, as later on, Ahab was killed in the battlefield shot by an arrow while waging war against Syria, and while the chariot stained with his blood was washed in a pool in Samaria, dogs came and licked his blood (1 Kings 22:38). Ahab was the king of the northern kingdom of Israel, and Jezebel was his wife; they followed the footsteps of Jeroboam and provoked the wrath of God with their greed.


The Sins of King Ahab and Jezebel

Ahab was a man easily stirred up by his wife into doing anything she bid him to do. As a result, he ended up following the sins committed by Jeroboam and turned into a typical heretic, replacing Jehovah God with golden calves and worshiping idols instead. It’s also said in the Bible that Ahab loved his wife Jezebel more than anyone else. A heretic is someone who loves another human being more than God, who cherishes the words of another person more than the Word of God, and who values the things of the world more than God. It’s such people whom God calls heretics. Ahab provoked the wrath of God because he had unquestionably accepted whatever his wife said, including even her fallacious beliefs.
Of course, if your wife says something that’s right and in accordance with the Word of God, then you should listen to her closely and accept her advice, but if it’s not, then you should reject her advice and teach her rightly. Both you and your spouse should correct each other’s mistakes. If your wife’s advice is beneficial to spreading the gospel of the water and the Spirit, you should accept her words. But there has to be some limits on what is acceptable when it comes to other types of advices that are carnally oriented. Since women are the weaker vessels, if your wife makes some demands that aren’t to your liking, you can still accept them to a certain extent as long as they are not too unreasonable. However, if you submit to your wife even when she demands you to worship idols rather than God, then you are surrendering yourself to evil. You have to be very careful about this and reject it, or otherwise you will become just like King Ahab.
Even among the servants of the gospel of the water and the Spirit, quite a few people ended up perishing in both body and spirit from accepting their wives’ advices too easily. Some people unquestionably accept everything their wives say 100 percent, but spiritually speaking, such people are today’s Ahabs. Even among the righteous, there are many brothers who let their Jezebel-like wives push them around. Many of my own acquaintances ended up facing spiritual death all because of their Jezebel-like wives. I just can’t understand these men no matter how hard I try. These men are prone to accept their wives’ words at face value even when their wives stir their thoughts in the wrong direction. So you have to be very careful.
There was a man in our gathering who, after ministering with us for a while, left us to go on his way. I was told that he used to call his wife a holy woman. I was shocked to hear that. Who on this earth would call his own wife a holy woman? How could anyone say this, unless he loved his wife too much and worshiped her like an idol? Given how every husband knows all about his wife’s blemishes, and how every wife also knows all about her husband’s flaws, how can anyone be a holy man or a holy woman? So what does it mean when someone calls her wife a holy woman despite all this? Do you think it’s right to exalt your own wife with your lips like this? What is then the hidden motivation behind describing one’s own wife as a holy woman? Isn’t it just another way of demanding recognition from everyone else to approve one’s own wife as a holy woman? The minister in question must have seen his own wife as a holy woman, though this was never true in my view. Such people are easily stirred to emotion by their wives in all aspects of life by only being led to sin.
That’s why the servants of God have the following admonishment for such men: “If you say and believe in such things, you will perish away in both body and spirit. But it’s not too late yet; you have to wake up even now. Don’t worry about your mistakes, as they will be all forgiven. What’s important is that you have to pay attention to the relationship with your wife now. We will tell you what is right, and so listen to the words of the servants of God, and as you carry on with your life, keep their advice in mind.” For those who have already fallen deep under their wives’ control, however, even such words of admonishment unfortunately fall onto deaf ears.
There also are some brothers whose spiritual fellowship with the servants of God ends up lost once they hear their wives’ words. In such cases, their previous fellowship with God’s servants is rendered all useless. When the servants of God painstakingly explain to them what is really right for hours, they say at first that they now understand the will of God. But once they talk with their wives just for half an hour, they make a complete U-turn to change their minds. It’s a mystery to me how anyone can accept his wife’s words so unquestionably. In some ways, such men may seem admirable, but when viewed spiritually, we can see that they are actually complete fools. In certain lights it seems as though they are much better than me. But spiritually speaking, I just can’t understand them. I keep wondering, “How can these men listen to their wives so well, and yet don’t listen to the servants of God?” It’s very likely for such people to be unable to unite with God’s Church and end up leaving the Church. But it’s actually better for God’s Church to be without them, as it can carry out God’s work better.


Today’s Christian Communities Are Also Overflowing with Such Sins