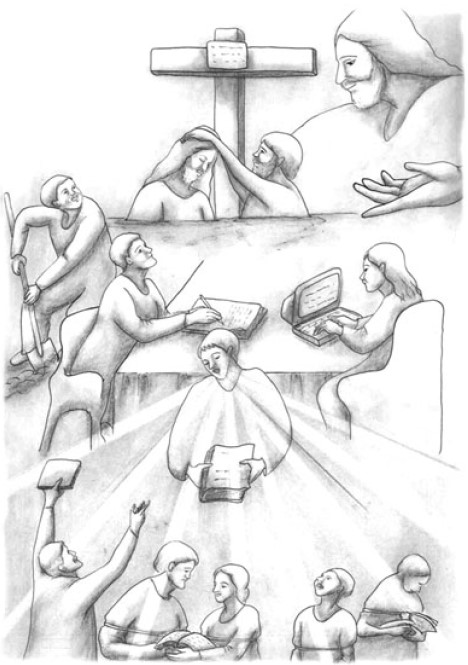 (Matthew 26:17-29)
“Now on the first day of the Feast of the Unleavened Bread the disciples came to Jesus, saying to Him, ‘Where do You want us to prepare for You to eat the Passover?’ And He said, ‘Go into the city to a certain man, and say to him, ‘The Teacher says, ‘My time is at hand; I will keep the Passover at your house with My disciples.’’ So the disciples did as Jesus had directed them; and they prepared the Passover. When evening had come, He sat down with the twelve. Now as they were eating, He said, ‘Assuredly I say to you, one of you will betray Me.’ And they were exceedingly sorrowful, and each of them began to say to Him, ‘Lord, is it I?’ He answered and said, ‘He who dipped his hand with Me in the dish will betray Me. The Son of Man indeed goes just as it is written of Him, but woe to that man by whom the Son of Man is betrayed! It would have been good for that man if he had not been born.’ Then Judas, who was betraying Him, answered and said, ‘Rabbi, is it I?’ He said to him, ‘You have said it.’ And as they were eating, Jesus took bread, blessed and broke it, and gave it to the disciples and said, ‘Take, eat; this is My body.’ Then He took the cup, and gave thanks, and gave it to them, saying, ‘Drink from it, all of you. For this is My blood of the new covenant, which is shed for many for the remission of sins. But I say to you, I will not drink of this fruit of the vine from now on until that day when I drink it new with you in My Father’s kingdom.’”
The Lord had the Last Supper before Passover. When the Lord prepared for the Last Supper, He told His disciples to go into the city to a certain man and tell him that He and His disciples would keep the Passover at his house. The disciples went into the city as Jesus said and told the man what they were instructed to say, and he obediently admitted them into his house. Therefore, the Lord was able to keep the Passover in that house with His disciples.
In today’s Scriptural passage, we see the Lord and His twelve disciples eating the Last Supper in the evening. There is an immortal masterpiece of art named “The Last Supper” by Leonardo da Vinci. If we look at the picture, the room that the Lord had the Last Supper in was really spacious and there was a very long table there. It wasn’t a table that is in a normal family’s house; it was a great, long table that would have been in a banquet hall. As the God of Creation, our Lord made everything, and He knows everything. Therefore, the Lord also knew that there was a certain man in the city that had that kind of table. Since there is nothing that Jesus couldn’t do, the Lord could say absurd things from His disciples’ point of view.
Looking at it from a human point of view, there were several times when the Lord said things that were preposterous. One example is that the Lord commanded His disciples to enter the city and bring Him a young donkey that was tied up there. Doesn’t that sound ridiculous? How could a person go into someone else’s neighborhood and, without the permission of the owner, untie a young donkey and take it away? If you look at it from a human point of view, since that act falls under theft, if they had been arrested, that is an act that requires being paid back many times over and being beaten. Therefore Jesus told the disciples who worried about what to do if they were arrested to say, “The Lord has need of the donkey.” It is impossible for that kind of thing to be said by someone except the Lord.
Keep in mind that if just anyone mimicked these words, they might fall into a big predicament. It would be sufficient if we just believe that these acts were possible because the acts of power were by the Lord. Since He is the only Master of the universe and everything in it, only the Lord could command for someone else’s property to be brought to Him. He can command someone to say, “The Lord has need of it,” when that person is caught.

Jesus Spoke during the Last Supper

In today’s Scriptural passage, the same scenario was unfolded. The Lord said to His disciples, “Go into the city to a certain man, and say to him, ‘The Teacher says, ‘My time is at hand; I will keep the Passover at your house with My disciples.’’” The disciples did as Jesus commanded and it all really turned out as He had said. This was something that only could have only been done by Jesus Christ the true God who made the universe and came to this earth in the flesh of man. The disciples thus prepared the table and all of the food according to the word of the Lord. So, they came to have the Last Supper in a certain man’s house in the city. It was dinnertime.
Jesus gathered the disciples and spoke to them. “One of you will betray Me.” Hearing that, they began whispering, and, driven by worry, they all asked, “Is it I?” The Lord spoke. “He who dipped his hand with Me in the dish will betray Me.” They put down a lump of bread, took pieces of it, dipped them into a bowl of milk or wine, and ate them. When Jesus put His hand in the bowl, one of the many disciples there clearly put his own hand in, also. Jesus added, “The Son of Man indeed goes just as it is written of Him, but woe to that man by whom the Son of Man is betrayed! It would have been good for that man if he had not been born.” The other disciples also asked, but when Judas asked, “Is it I,” Jesus said, “You have said it.”
Isn’t this very clear? Yes, it is. The Lord knew everything to come. When Judas, who was going to betray Jesus in a short while, asked, “Is it I,” the Lord, who already knew everything about it, replied, “Yes, you have said it.” Jesus clearly told Judas that He already knew he would betray Him, but, even so, Judas did not change his mind. He probably didn’t even perceive that the Lord already knew that he was going to betray Him. That is because he did not believe that Jesus is God. And Judas had a desire to betray Jesus because Satan had already entered his heart. Even though Jesus told Judas so he would be awakened to his evil plot, Judas didn’t express his emotions and continued as before to think about taking care of the money he would get for betraying Jesus.
Judas never called Jesus “Lord.” He usually called Jesus “Teacher.” He regarded Jesus as only a very wonderful man. Since he had more interest in the honor of this world, he could not believe the Word of God with a pure heart. Since his greed toward the world was bigger than his belief in Jesus, it was very easy for Satan to use him.
Actually, there were just as many people who hated Jesus as those who followed, believed, and depended on Him. Many people who disliked Him thought, “A country boy from Nazareth comes and the whole country is stirred up and everyone follows Him.” “What on earth did that kind of country bumpkin do to warrant such attention?” As such, those high in the government of Israel, including the High Priests and the scribes that believed in Jehovah, really hated Jesus. On the one side, people who were poor, worthless, sick, and in pain and people who mourned believed in Jesus and followed Him, but Judas saw that most of the rich and the powerful ruled over others and were well off hated Jesus, and he followed after the majority that had the honor of man, power, and authority. Since Judas had accompanied Jesus, he knew that He wasn’t a bad person. But, the religious leaders that he respected slandered Jesus and were irritated that they couldn’t kill Him, so Judas was on their side because he thought that he could make a reputation with the people who tried to catch Jesus by giving Him up. Judas always had that sort of greed in his heart.
On the evening two days before the Passover feast, Jesus and His disciples were eating. At that time, Jesus said, “One of you will betray Me.” When Judas said, “Is it I,” Jesus said, “You have said it.” Even though no one else knew, Judas and Jesus knew that Judas would betray Him. People know themselves well. Since Judas had decided to betray Jesus, when all of the others asked, “Is it I,” Judas also carefully joined and asked so with a pricked heart. Because Jesus knew what Judas would do, He said, “You have said it.” Even so, Judas didn’t change his mind but betrayed Jesus. Since Judas betrayed Jesus, He stood in the court of Pilate, died on the Cross, and came back to life on the third day.
When Jesus died on the Cross, it became clearly known that Jesus was the Son of God while the whole heavens darkened for three hours, and Judas realized for the first time that he had done wrong and was regretful. But, it was already too late. As was recorded, Jesus gave the ultimate sacrifice that eliminated all of our sins through His baptism and death on the Cross and went to God the Father. But Judas’s life ended as a cursed one that would have been good had he not been born, just as Jesus said, “The Son of Man indeed goes just as it is written of Him, but woe to that man by whom the Son of Man is betrayed! It would have been good for that man if he had not been born” (Matthew 26:24).

Jesus Saved Us by Giving His Body and Blood

Let’s Live Out Our Faith While Serving the Lord

The Life for the Preaching of the Gospel Is Joyous