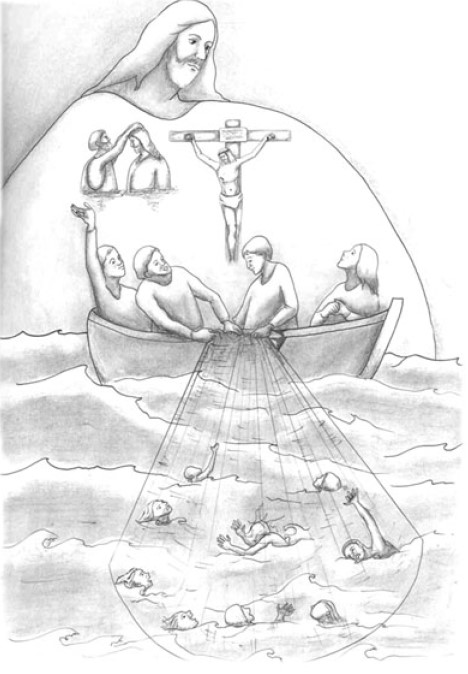 (Matthew 28:11-20)
“Now while they were going, behold, some of the guard came into the city and reported to the chief priests all the things that had happened. When they had assembled with the elders and consulted together, they gave a large sum of money to the soldiers, saying, ‘Tell them, ‘His disciples came at night and stole Him away while we slept.’ And if this come to the governor’s ears, we will appease him and make you secure.’ So they took the money and did as they were instructed; and this saying is commonly reported among the Jews until this day. Then the eleven disciples went away into Galilee, to the mountain which Jesus had appointed for them. When they saw Him, they worshiped Him; but some doubted. And Jesus came and spoke to them, saying, ‘All authority has been given to Me in heaven and on earth. Go therefore and make disciples of all the nations, baptizing them in the name of the Father and of the Son and of the Holy Spirit, teaching them to observe all things that I have commanded you; and lo, I am with you always, even to the end of the age.’ Amen.”

Jesus Was an Existential Character

Jesus has resurrected from death and came out from the grave. The Resurrection of our Lord was a very evident fact. His resurrection was not a fabricated story that left room for any doubt. Jesus had resurrected indeed and testified as to His resurrection to around 500 saints (1 Corinthians 15:6), and for forty days, He continually testified of His resurrection until He ascended to Heaven.
Many historians have asserted that Jesus might not be a real person regarding the Bible as just a mere fabrication of man. And so they have investigated with all sorts of methods just to find out errors in the Bible doubting its genuineness. However, the more they investigate the acts of Jesus historically, the more they are able to confirm and strengthen the fact that indeed He existed. The works He had done on Earth were also written and recorded on other documents aside from the texts in the Bible. Therefore, the more we would investigate, the more we would find out the corroborative facts that show all the historical facts are true, such as that Jesus came to this world; that He was baptized for mankind; that He died on the Cross and then was resurrected; and all the ways and the works He had done while He was on earth. What our Lord has said has greatly influenced all mankind up to and including the present time. And I believe from all the facts that the Lord really existed as a historical reality.
Many people who doubted Jesus’ historical reality have come to know this truth upon investigating about Him. The original author of the movie, “Ben-Hur” was initially a non-believer. At first, he thought that Jesus never really existed and so he started his investigation to find the data which could overthrow the records of the Bible about Jesus having some kind of a sense of duty to save religious zealots or His fanatic believers. However, he realized that Jesus was a real being who really existed historically and archeologically. Because of that he started to believe in Him and eventually came to praise Him. After all, he praised Jesus and said, “Truly, the Lord is my Savior and my God.”
There is no other man who has influenced mankind the way Jesus did in human history. Jesus is still in the hearts of the people even as the time passes, and His sayings and works continue to change the hearts of many. Also, He has cleansed the sins in the minds of the people who believe in His Word. And He still is influencing the mind and thought of each individual and also in the whole of human culture.

Today, celebrating Easter, we cannot have any doubt in the part that Jesus has resurrected. Evidently, Jesus being resurrected, testified of His resurrection for forty days, and ascended to Heaven in the eyes of the people. After ascending to Heaven, He left the Word of God on Earth and He sent forth the Holy Spirit. In other words, Jesus Christ gave to those who knew and believed in Him through the Word the gift of the Holy Spirit and the power to be God’s children. And He has testified eternally to all of what He has done through the Holy Spirit.
We believe that Jesus is our Savior and God of all Creation. We believe that Jesus has been resurrected and was brought back to life again. Our Lord met His disciples after being resurrected. After the incident of the resurrection, the Roman soldiers who kept His corpse went to the high priests and said. “In reality, the angels appeared and opened the door of the grave. And truly, Jesus has resurrected. He was brought to life again.” Though all the accounts recorded in this Bible are clearly evident facts, I believe that the testimony of the Roman soldiers who kept the dead body of Jesus at that time is the most reliable evidence of His resurrection. The soldiers had heavily guarded Jesus’ tomb for fear that His disciples might steal His corpse and might possibly spread a groundless rumor about His Resurrection. And then they were able to vividly testify because they had seen the empty grave of Jesus with their very own eyes.
Jesus was not found in the grave because He had been resurrected. Upon seeing such an empty grave, the Roman soldiers got terrified and fled. They reported this astonishing incident to the high priests for the first time. The soldiers told them that He really was resurrected and was brought back to life, and that they had actually seen it happened. Then, the high priests bribed the guards with lots of money, saying, “Tell a lie to the people that His disciples have stolen the body while you were asleep. If the governor would know about this, you might be in serious trouble and would be blamed of neglecting your duties. But we will handle that problem. Anyway, go and tell the people that the disciples of Jesus have stolen His body.” So, the rumor spread by the guards could be seemingly widespread among the people.

The Lord Is with Us, Even to the End of the Age

The Lord told us to live by faith in God. It is stated, “The just shall live by faith” (Romans 1:17). Jesus commanded to the disciples to keep and testify to the principle that we drive the enemies away by faith, receive the blessings by faith, to follow the Lord by faith, enter Heaven by faith, and obtain everything until the time of our resurrection by faith. The Lord said, “Teach them to observe all things that I have commanded you.”
We have to defend our faith. And we have to teach people in the world how to live by faith. We have to teach the gospel of the water and the Spirit. We also have to teach people that they should have true faith and make use of this faith in every work; we have to teach them that they must believe in the Lord and His Word with heart, rely on Him, witness Him by faith, and live by faith. The Lord told us to teach this for people to observe all things that He has commanded us. How many people are here on earth not living like that? The Lord commands us to make those people to live like that as well. We have to live by faith according to His Will. After all, what the Lord has said to us, is the Truth, we have to live by believing in that Word.
Another thing we should know is that the Lord is always with us even to the end of the age. We must believe in this and bear this in mind. We, who received the remission of sins by the water and the Spirit, have to believe that the Lord is with us the righteous, that is, the servants of God and the saints until the end whether we personally end our lives or the whole world ceases to exist. More over, we have to believe with our minds and hearts that the Lord is with us in any time and any hour, whether we are in trouble or not, happy or unhappy. We can live a blessed life by believing that the Lord is always with us.
He does not just leave us alone after He has redeemed us. The Lord is always with us. He earnestly asks God the Father for the faith through the Holy Spirit instead of us when we lack faith. When we believe in the Word of God, the Lord guarantees and helps us as the Supporter, witnessing, “Yes, your faith is right.” He also helps all the saints and the servants of God, who have received the remission of sins, as the Counselor. Therefore, we must not think that we are alone. The Lord is with us all the time. Though sometimes you may feel like living alone, I admonish you to keep in mind that the Lord is always with you, the redeemed. And He is always speaking intimately to us through the Bible, the mouth of the servant of God, the predecessors in faith, or other members. The Lord is always telling us through His Word, saying, “The written Word is right. Do you believe in this? Yes, do believe so.” We must believe that the Lord is always telling us what God has said from the beginning of His Creation.
We must live by faith all the time. We must believe that we will be brought back to a new life just as Jesus was resurrected after He had blotted out all our sins through His baptism and the blood He shed on the Cross. It will happen in the future that when we, the people who have new life end our lives on earth, and when our Lord is descending to earth, our bodies will be brought back to life again. We have to believe that we are going to live with the Lord in Heaven forever, and there will be no other death later once we die and are resurrected. We must know that there is no eternal death to us but we just fall asleep for a while. And we must believe that the Lord has given the new life to us who are born again of water and the Spirit. You must have this faith personally, not any body else.
We have eaten Easter eggs this noon because today is Easter Sunday. Our young sisters wrapped the eggs with a nice wrapper with the words, “Merry Easter!” or “Jesus Has Resurrected!” and distributed them to the other church members. As the chickens are hatched out from the eggs, we must not forget that our dead and rotting bodies will live forever after obtaining new life and being changed anew. Now, our souls are already born again of water and the Spirit, but our bodies are still the ones that will rot away. However, there is hope for us when we believe that our bodies will revive and both of our souls and bodies will be complete at the day when our Lord will come.